The Underground Student Council (, Ura Seito-Kai⃝ℹ), nicknamed the USC, is a fictional organization in Prison School that enforces the traditional rules of the school code of Hachimitsu Academy. Controlled by the 40th USC President (& crow-user) Mari Kurihara, they enjoy a historically elevated status in the school, with their own designated school office and faculty influence. Though a vigilante organisation, they enjoy more student popularity than the official Student Council.

The Underground Student Council are introduced as a shadowy organisation with their own motivations and agendas. To explain the reason why the girls do not talk to the five first-year boys, girls in the bathing area mention the USC as policing this rule by the crows that spy on the student body. When the boys intrude into a female-only bathing area, the USC incarcerate them in the school's Prison Block.

The Underground Student Council used to be popular among the student body, but after a combination of the revelation of their physical abuse of the prisoners, the USC's own imprisonment, and a smear campaign started by the official Student Council, the USC's popularity took a massive dive to the point that the only supporters left are a handful of girls and ironically the boys whom they abused earlier on. Kate of the official Student Council also plotted to disband the USC through an ultimatum in the Sports Festival: The loser of the Cavalry competition will have to disband their respective Student Council permanently.

Their lack of popularity presented the USC with massive strength and numbers disadvantages during the Sports Festival's Cavalry competition, but they somehow pulled through to force a draw with the ASC. Neither student council were forced to disband and the USC gets to keep their prestigious office, thus forcing the ASC to move back to their old office. It is unclear as of now as to whether the USC's popularity has been restored after the Sports Festival event.

Despite the strict rules set on the student body by the USC on not having relations with boys, it was shown that the USC themselves had violated those rules many times. During the boys' stay in the prison, Meiko Shiraki has engaged in perverse dominatrix behavior with the boys through her lack of shame in showing her body to them along with physical violence. Hana Midorikawa repeatedly looks for opportunities to be alone with Kiyoshi so she can harass him freely, and secretly went on a date with him. While Mari Kurihara did not have any true illicit relation with any boys, she engaged in sexual foreplay with Kate and eventually approves of Kiyoshi to date her sister Chiyo Kurihara.

The manga ending revealed that the Underground Student Council apparently survived, with Chiyo Kurihara taking over and following her elder sister Mari's footsteps.

The traditional rules of the school code the Underground Student Council police are draconian laws that go back to the school's founding that are still in place, which punishes even the most minor infractions with a stay in the school's Prison Block.

As part of its elevated status, the USC also has control over the yearly extracurricular agenda (such as the Sports Festival and school trips) at the start of the manga, though it is implied that the student clubs are in control of the official Student Council.

Above the school's traditional code and other policies, they enforce a policy of resistance upon the student body to male enrollment in the school, posting notices around the school in girl-only areas:

The Underground Student Council consists of four senior members, run by the 40th President & crow-user Mari Kurihara and Vice President Meiko Shiraki, with secretary Hana Midorikawa and ex-member Anzu Yokoyama, who was Commander of the Guards. There are also junior members, of which only two fat and tall baton-armed female henchmen have been shown (in Chapter 3). 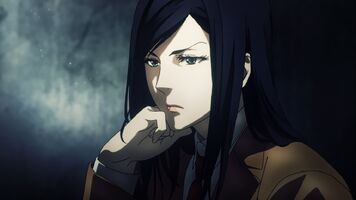 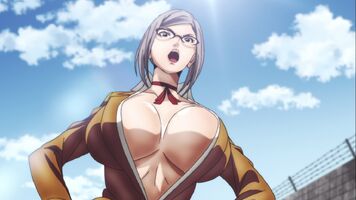 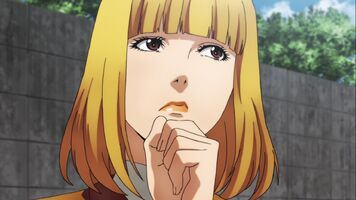 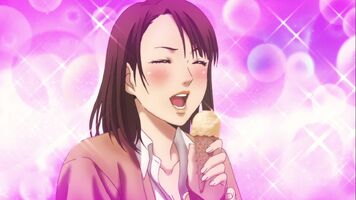 The USC's senior members in the manga.

The USC office in the anime.

USC-ASC height comparision
Add a photo to this gallery

Retrieved from "https://prison-school.fandom.com/wiki/Underground_Student_Council?oldid=18737"
Community content is available under CC-BY-SA unless otherwise noted.