Takehito Morokuzu (, Morokuzu Takehito⃝ℹ), nicknamed Gakuto (ガクト, Gakuto⃝ℹ) or Gackt†, is a secondary protagonist of Prison School, and is one of the five first-year boys in attendance of all-girls school Hachimitsu Academy.

His love interest is Mitsuko Yokoyama, the secretary of the Aboveground Student Council.

Gakuto is tall and wiry (only shorter than Reiji Andou from the boys). He has black hair and black eyes due to his Japanese heritage. Gakuto is the only boy in the group to wear glasses and sports long locks until Volume 8, when he offers to have Meiko Shiraki (the USC Vice-President) shave them off his head. Thus, he is now a skinhead after his incarceration in the Prison Block.

Noted to have been the leanest of the five, Gakuto gains muscle in the Prison Block from hard labor to become lean and tall with an average weight.

Gakuto is a calculating and intelligent person, though relatively lacking in his studies. He is thus the mastermind behind a lot of the organized breakouts in the prison along with Kiyoshi Fujino. Gakuto's plots also prevent the boys from being excluded several times. He is obsessed with the Three Kingdoms and is the smartest of the five.

However, in rare cases, if Takehito realizes that the plans he organized are failing and there is nothing he can do or think of, he would began to get stress to the point of losing his own sanity out of frustration and gets driven into a state of being a crazed, and ignorant-minded fool, this was showcase as it happens two time in the manga[1][2][3].

He is still one of the most lecherous of the five and shows 'otaku' habits in his behavior, spending much time at the School Library when not imprisoned and going to great lengths inside it in order to get a collector figurine. Gakuto has an eclectic & archaic style of speech, punctuating his words with "indeed" (ござる, gozaru⃝ℹ).

He is a respectful person, referring to himself as "yours truly" (小生, shōsei⃝ℹ)[4] and using the honorific "-dono" (どの, "-dono"⃝ℹ) when referring to his friends. Gakuto is one of the most reliable characters in the series, sacrificing his long locks and dignity to prevent his friends from being harmed in any way.

After enrolling at all-girls school Hachimitsu Academy with middle-school friend Jouji Nezu, Gakuto spends much time in the library or on the dorm computer researching the Three Kingdoms. He and the other boys are unable to approach a girl on the first day, except Kiyoshi Fujino. Gakuto is soon incarcerated in the school's Prison Block with the other boys for violating the privacy of girls in the female bathing area of the swimming pool. He is caught immediately by the Underground Student Council but attempts to cover for Kiyoshi Fujino, who is still caught by the USC President Mari Kurihara away from the bathing area (and the boys). When in the Prison Block, the boys are beaten by USC Vice-President Meiko Shiraki, which Kiyoshi tries to prevent. Gakuto and the other boys reveal that they in fact pervertedly enjoy her punishment. The USC Vice-President is then replaced by the USC secretary Hana Midorikawa, who is too violent to the boys for their liking (and dresses modestly). When Kiyoshi's actions drives Hana to tears out of anger and embarrassment, the boys celebrate and Meiko continues the guard duty.

Gakuto starts conspiring with Kiyoshi to breakout after he is jailed in the school's Prison Block with the other boys for 2 months. He plots with Kiyoshi and gives him aid regularly so he can get a rare Guan Yu collector figurine from Kiyoshi at a four-year convention. Shingo Wakamoto sees them speaking in the bath with Gakuto kneeling on the floor, misinterpreting their private discussion as a gay relationship. The pair dig a large escape hole in the disposal area and obtain an MP3 player with wireless speakers to function as a distraction on the day, as Kiyoshi is to pretend to be stuck in the toilet and use his 'haemorrhoids' as an excuse. Gakuto defecates on himself in an ICT classroom full of girls in order to obtain a recording for the distraction. After the large escape hole in the disposal area is mistakenly filled by the Chairman with cement, Kiyoshi orders Gakuto to aid him steal a girl's uniform. Gakuto then asks Meiko to cut off his long locks so he can make a wig for Kiyoshi to wear on the first breakout. The two prisoners use the uniform wih Gakuto's live hair wig to sneak a cross-dressing Kiyoshi secretly out of the school grounds. When Kiyoshi returns, Gakuto remains oblivious to Kiyoshi's failed date, until they are all punished with an extended stay in the Prison Block due to Chiyo Kurihara reporting him to her father (revealed to be the school's chairman).

Gakuto witnesses Operation Boys Expulsion (男子退学オペレーション, Danshi Taigaku Operēshon⃝ℹ), codenamed DTO; a plot by the USC to induce two more breakouts of other boys in order to expel them. When the boys set up a wrestling contest as a decoy, Gakuto sneaks away for ten minutes to recover email data evidence of DTO. To gain more time to upload the evidence and show it to the Chairman, the boys successfully appeal to the Chairman by solving his "Tits VS. Asses" riddle. Chiyo starts sending messages through the boys' meals and intercepting the messages tagged to the food binbags in the disposal area. Using their food messaging system, Gakuto plans to have Chiyo rendezvous with the boys and performs a triple switch with Jouji, enabling him to gather evidence of their being framed in the USC's plots (via Operation Boys Expulsion). He presents the evidence on a USB stick to the Chairman, who orders their release and overturns the boys' imminent expulsions.

After they begin helping the ASC with manual labour, Gakuto and Andre are assigned guard duty over the USC senior members. In order to understand Mitsuko's fascination with yaoi manga, Gakuto asks Joe to help him with enacting scenes that he saw from 'Three Kingdoms'-related doujinshi though Jo misunderstands his intentions at first. Though Gakuto begins to develop an understanding of yaoi, his conflicted self is in debate over whether he should continue with it. However, he remains unaware of Jo's confused feelings for him. When a distraught Gakuto ends their exploration after finding Mitsuko's doujinshi featuring himself and Joe, he remains confused over Mitsuko's avoidance over her assumption that the two are in a relationship. Nevertheless, Gakuto continues to pursue her at the Prison Block and the library in order to explain himself though she continues evading him through her ASC duties.

When Gakuto is with Mitsuko however, he discovers that the Student Council plans to replace the Wet T-Shirt Contest in the USC's yearly agenda with a clamming trip, which finally unifies the boys in heart and soul as a team in saving the Wet T-Shirt Contest and helping the USC. However, the boys waste much time producing a non-functioning Plastic Bottle Rocket. Under Mari's instruction, Gakuto plots to deliver an escape kit to the prison as and fire a water bottle rocket attached to secured rope over the Student Council President Kate Takenomiya's room. To his shock, Kiyoshi reveals to the boys that Mari was not planning escape but acted to nullify the ASC's subterfuge ahead of their upcoming battle.

In the hours preceding the All-Student-Council Cavalry Battle in the school's Sports Festival, Gakuto fails to find anyone to nominate as the fourth member of the USC cavalry team after both Hana and Kiyoshi disappear before the event. When he returns to the boy's dorm to pick up the remaining remnant of the PBR, he sees a pile of futons (with Hana and Kiyoshi hiding below). Gakuto soon leaves after the PBR remnant reappears and Chiyo receives a text from Hana claiming that Kiyoshi is with him, confusing both of them. It is within the strategy meeting with the USC that Gakuto is the one to suggest the revival of Meiko's "Vice-President" persona as key to their victory. To this end, Gakuto constructs a carbonated soda delivery system for Meiko's back that works until it overloads and Mari is forced to remove it.

During the cavalry match, Gakuto, Joe and Shingo formed a team with the PBR as the leader on Gakuto's head, in support of the USC but found that they can't help much as the PBR is an immobile object. As the match drags on, Mari's team mounted on top of the boys' team in order for Mari to be at a high enough position to reach for Kate's headband. The plan failed and the boys' team crumbled and was taken out of the game, leaving only Mari's team. Later on, Mitsuko's clumsiness threatened a helicopter's impending collision with the school. During the ensuing chaos, Gakuto's PBR came loose and he desperately struggles to get it back, inadvertently playing part of a role in saving the school and his status as a pariah was changed to that of a hero overnight.

Gakuto's new-found fame means he had many admirers, but this also means that he was unable to fulfill his promise to study The 3 Kingdoms with Mitsuko, much to her dismay. Gakuto, Joe, Shingo, and Andre still continued their worship of PBR by undertaking a project to build a PBR-ship. Kiyoshi offered to get Mitsuko and Gakuto together again in exchange for Mitsuko to talk to Kate about sponsoring the BBQ party. However later on, Mitsuko caught Gakuto cavorting with Bitch, and she stormed off in anger. Later on, Gakuto attempt to seek her forgiveness, and was initially confused by her answer until Bitch reminded him that Mitsuko was actually making a reference to the 3 Kingdoms in this forgiveness ritual. Bitch joined in and proposed a competition with Mitsuko where the winner becomes Gakuto's girlfriend. Gakuto becomes the judge in this competition. In the final test, Mitsuko managed to fulfill the literal request made by Gakuto but she realizes too late that the actual test was another reference to the 3 Kingdoms. Bitch decided to let Gakuto make the final decision. However, Gakuto's indecisiveness frustrated both girls, and they left him alone.

On the day of the BBQ event, Gakuto, Joe, Shingo, Mayumi, Satou, and Anzu traveled to the venue only to get sidetracked into riding the boys' PBR-ship along the river. Gakuto was initially concerned that he had no way of stopping the ship's movements but his worries were soon waved away when the boys and girls ended up playing in the water, which in a way fulfills the boys' own dream of having a Wet T-Shirt event with the girls. The group was last seen riding on the PBR-ship to the sea, apparently having forgotten about the BBQ event altogether. 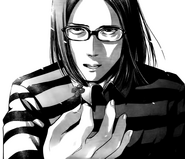 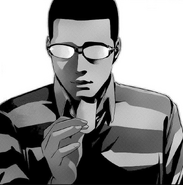 Gakuto on the Volume 25 cover 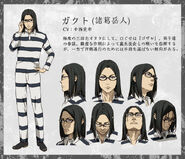