Shingo Wakamoto ( , Wakamoto Shingo⃝ℹ), nicknamed Shingo (シンゴ, Shingo⃝ℹ), is a supporting character of Prison School, and is one of the five first-year boys in attendance of all-girls school Hachimitsu Academy. His love interest is Anzu Yokoyama, an ex-member of the Underground Student Council who worked as Captain of the Guards. Shingo was originally a secondary protagonist sharing equal focus with the other boys, but he gradually grew less prominent after his release from the prison.

Shingo is a teenage boy of average height, with blonde hair and light skin. His gelled hair and open collar give him the appearance of a thug. Shingo has an average weight with the least muscle of the five boys. Only Jouji Nezu is shorter than him out of the five boys. He is commonly seen wearing the normal school uniform with an open collar and no tie.

Shingo is a moody and nonchalant individual who is often the source of the more pessimistic opinions shared by the boys. He often makes selfish decisions for self-promotion or personal benefit at the expense of the 'team', putting him at odds with the other boys. Shingo is one of the more lecherous people in the boys, eagerly plotting to peek at a female bathing area with the other boys. He can be excessively narcissistic at times, holding his physical appearance in high esteem and requesting a hair pomade as a prisoner gift. Though he is mostly loyal to the other boys, he sometimes acts with hypocrisy to betray them and then judge Kiyoshi Fujino badly for the same act. Shingo is prone to sulking and acting peevish when things are not going the way he likes, leaving his cell unkempt and constantly voicing his complaint when all their prison stays are extended. His crush for Anzu Yokoyama changes him for the better and gives him a more positive outlook on life.

After enrolling at all-girls school Hachimitsu Academy with middle school friend Kiyoshi Fujino, Shingo is unable to approach girls due to his pessimism. Except for Kiyoshi, he and the other boys are unable to approach a girl on the first day. Shingo is promptly imprisoned in the school's Prison Block with the other boys for violating the privacy of girls in a female bathing area. Though he is caught immediately by the Underground Student Council with the other boys, Kiyoshi is still caught by the USC President Mari Kurihara away from the bathing area and the boys after sucessfully infiltrating it. When in the Prison Block, the boys are beaten by USC Vice-President Meiko Shiraki, which Kiyoshi tries to prevent. However, Shingo and the other boys object to this, revealing their perverted enjoyment of her punishment in the process. As a result of this, the USC Vice-President is then replaced by the USC secretary Hana Midorikawa, who is too violent and modestly dressing for the boys' liking - until Kiyoshi's incident with Hana results in Meiko continuing the guard duty.

In the Prison Block, Shingo either plays playground games with the other boys in the school courtyard or watches news channels in the mess hall - remaining entirely unaware of Kiyoshi and Gakuto's secret plotting in the waste disposal area to commit a breakout. Due to a prior misunderstanding in the male bathing area, Shingo assumes that the two are in a physical relationship which becomes a source of comical insults for Kiyoshi. Though the other boys later declare their "support" for them, both Gakuto and Kiyoshi are forced to conceal the true reason for their association when they are questioned about it. However, the real reason for their association is revealed to the boys and the USC when Kiyoshi is caught crossdressing out of the Prison Block. As a result, Shingo leaves his cell unkempt and becomes petulant over Kiyoshi's betrayal of him.

After finding out Kiyoshi's break out attempt, his resentment towards him for their extended sentences leads to him masterminding Kiyoshi's ostracism. This anger against Kiyoshi motivates him to give information to the Underground Student Council about the boys in exchange for food, off-campus leave and lesser punishments. When Joe nearly falls in the USC's trap, Shingo is then blackmailed to continue his spying activities. When Shingo gains daily leave from imprisonment, he meets Anzu Yokoyama in a games arcade and pretends to be on exemplary leave. However, he falls victim to the USC's trap as Anzu reveals that she was a spy tasked with making him arrive after curfew. Thus, the boys would be expelled for a third breakout due to the USC's machinations under DTO. Though she warns him during his confession, he nearly manages to come back in time but is one second late. Forgiven by his friends after a heavy beating, he participates with them in their plan to procure email evidence of the USC's DTO to the Chairman - who orders their release and overturns the boys' imminent expulsions.

To Shingo's suprise, the USC are jailed by the official Student Council for physically abusing the boys and violating the school rules. After his release, a hopeful Shingo tries to romance Anzu into kissing him at a karaoke rendezvous but is beaten bloody by her due to Kiyoshi's bad advice. She breaks her relationship with him as a result and refuses Chiyo's call of help to rescue Kiyoshi. Due to Kiyoshi's role in the karaoke incident, she also advises Chiyo to not give a plastic bottle to Kiyoshi while not wanting to hear thing about him anymore. However, Shingo agreed to help Kiyoshi and Mari to escape only after Gakuto informs him and Joe that the SC supress the Wet T-Shirt Contest. He shows his rallying to the cause with Joe by wearing a T-shirt glorifying the Contest. With the other boys, he aids in the creation of the Plastic Bottle Rocket thinking Mari needed it for her escape.

The day before the school's Sports Festival, he and Gakuto barricade the boys's room against Risa and unintentionally enrages the latter by insulting her. After Risa is knocked unconscious by the falling PBR fragment, he is informed by Gakuto of Mari's real plan. On the day of the Sports Festival and the All-Student-Council Cavalry Battle, he chose Anzu as a candidate for the jockey post only for the PBR to chosen. As the cavalry contest was upcoming, Shingo help the boys in trying to revive Meiko's Vice-President persona. It is Shingo that unintentionally found a lead when he shoved away Mari who was protesting against the hard treatment the boys subject Meiko to. The USC and the boys eventually discovered that it was the carbonation from soft drinks that restore Meiko's strong personality for a few seconds (Although that proved to be wrong later on in the cavalry match).

During the cavalry match, Gakuto, Joe and Shingo formed a team with the PBR as the leader on Gakuto's head, in support of the USC but found that they can't help much as the PBR is an immobile object. As the match drags on, Mari's team mounted on top of the boys' team in order for Mari to be at a high enough position to reach for Kate's headband. The plan failed and the boys' team crumbled and was taken out of the game, leaving only Mari's team. Later on, Mitsuko's clumsiness threatened a helicopter's impending collision with the school. During the ensuing chaos, Gakuto's PBR came loose and he desperately struggles to get it back, Shingo and Joe followed behind ostensibly to help Gakuto, but were actually taking the opportunity to grope the girls in the huge crowd and were sharply rebuked for their actions. Gakuto's actions inadvertently played a role in saving the school from the colliding helicopter.

After the Sports Festival, Joe and Shingo were branded perverts by the school while Gakuto turned from pariah to hero overnight. Gakuto convinced them that they can redeem themselves by building a new Plastic Bottle Rocket so as to appease the PBR Goddess - The PBR-ship. On the day of the BBQ event, Gakuto, Joe, Shingo, Mayumi, Satou, and Anzu traveled to the venue only to get sidetracked into riding the boys' PBR-ship along the river. The boys and girls ended up playing in the water, which in a way fulfills the boys' own dream of having a Wet T-Shirt event with the girls. The group was last seen riding on the PBR-ship to the sea, apparently having forgotten about the BBQ event altogether.

She's the girl he likes.

He has been a friend of Kiyoshi since middle school. 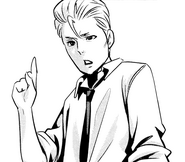 Shingo in the manga 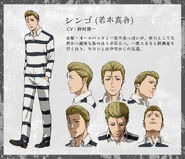