Risa Bettou (, Bettou Risa⃝ℹ) is a supporting character of Prison School and a a third-year student in attendance at Hachimitsu Academy.[1] Risa is the Vice-President of the official Aboveground Student Council and the love interest of Reiji Andou, commonly referred to as Andre. She is the warden of the Prison Block during the Underground Student Council's imprisonment, and Kate's best friend.

Risa is a slim young woman of middling height, and also has blue eyes and hair in a boycut. She has shaved eyebrows, thin lips, and wears dark eyeliner that gives her a hawkish and tough appearance. Risa is usually seen wearing the standard female school uniform, and wears a embellished prison guard uniform while on guard duty. She is always seen wielding a shinai (a bamboo kendou-style sword), and can replace it with any long hard object from the environment if need be (such as a metal pipe).

Risa is introduced as the Vice-President of the Aboveground Student Council when the USC are jailed by them for physically abusing the boys and violating the School Code in their attempts at framing them, after being placed in dorm arrest by the Chairman. Risa is assigned to the position of guard duty overseeing the female prisoners on a day-to-day basis, and treats them cruelly during their detention. When she mistreats Mari and forces her to do heavy labour with Meiko, the other USC members try to physically defend her but Risa repulses all physical attacks from Hana or Meiko with her shinai. Though Meiko manages to disarm her, Kate appears and insults her until Mari pleads for her sentence not to be extended for resistance. She is part of the scheme to make Meiko's personality regress by framing Meiko for burning a tree with a crowlings' nest and later arresting Kiyoshi when he is caught for trespassing and attempting to collect evidence of the plan in the ASC office.

After they begin helping the ASC with manual labour, Gakuto and Andre are assigned guard duty over the USC senior members. Andre gives her a book on capitalist economics by Friedman after branding his masochism towards Meiko as "Andrenomics". Risa quickly grew a crush on Andre and tries to engage in his masochism by trying many times to punish him like Meiko did, but fails. Risa even tried to buy a dominatrix outfit, but all of them were too expensive. The shop-owner, a dominatrix herself, gave Risa an old one out of sympathy. During Andre's mental breakdown, she tries to uses a mentally-regressed Meiko to 'calm' him but this attempt fail after Andre realizes the USC Vice-President is still not herself. After convincing Andre that Meiko's old personality is lost, she tames Andre by tying him 5 hours without water after trapping him by impersonating the USC Vice-President and he becomes her "submissive". During her watch of Kiyoshi in a attempt to prevent Mari escape, she is distracted many times by his indecent behaviour though she manages to overcome this after a meeting with Andre. She is 'defeated' by the boys when she manages to break into their chamber, thinking they were helping Mari to escape.

Risa uses him then as her 'mount' for the All-Student-Council Cavalry Battle on the day of the School Festival, taunting the USC before the beginning of the event by showing her coordination with Andre. She participates in the obstacle course, where she takes the lead in the race because of running bare and Hana being unaccustomed to Kiyoshi's underwear that she is wearing. However, upon reaching a checkpoint, the condition given to Risa for continuing the race turned out to be having a friend. She struggled at this for a while before Kate came in to re-assure her that they are best friends. The momentary delay allows Hana to catch up to Risa in the 100 meter sprint while wearing a cat costume before falling at the finish line. Though Risa appears to cross the line first, the race is declared a draw after an appeal due to the ears of Hana's costume touching the line just as Risa crossed it.

During the cavalry match, Risa controlled Andre with directions given by Kate. Despite the large advantage the ASC had in terms of both power and numbers, Mari's repeated bending of the rules allowed a direct confrontation between her team and Kate's team. Risa was shown to be embarrassed when Joe questioned her relationship with Andre, which weakened her control over Andre. Kate had her own tricks up her sleeve however, and counter-attacked. Risa later calmed down, but did not get much of a break when Meiko's strong personality was restored. Risa and Meiko then struggled for control of Andre, which resulted in Andre shutting down for the remainder of the match. Risa herself could no longer bear to control Andre anymore after seeing him suffer. This left Kate's team immobile and vulnerable to the newly revived Meiko. Kate's last resort in Mitsuko's clumsiness resulted in the destruction of the prison and forced the match to be declared a draw. 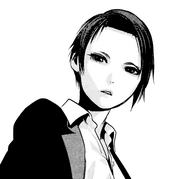 Risa in the manga 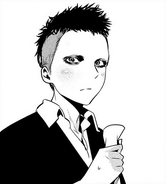 Risa on the Volume 12 cover

Risa on the Volume 16 cover

Retrieved from "https://prison-school.fandom.com/wiki/Risa_Bettou?oldid=19074"
Community content is available under CC-BY-SA unless otherwise noted.