Reiji Andou ( , Andō Reiji⃝ℹ), nicknamed Andre (アンドレ, Andore⃝ℹ) is a secondary protagonist of Prison School, and one of the five first-year boys in attendance of all-girls school Hachimitsu Academy. He has a masochistic love interest for Meiko Shiraki, but it later develops such for Risa Bettou, the Vice-President of the official Aboveground Student Council.

Andre is an obese tall young man, with black hair and pale skin. He has black hair and black eyes. Andre is heavily covered in mounds of fat and also is the tallest out of the boys, proving himself as the strongest of the five boys during his incarceration in the Prison Block of the school by arm wrestling with the Vice President for five minutes. Andre has the strangest facial features of any character in the series: his ear lobules reach all the way to the neck below his large head and even though his head is larger than a normal person's head, his face is proportionally smaller than the average teenage boy's face.

The gentle-mannered calm nature of Andre is shown in his deep care for his friends, often placing them ahead of himself in his relations with them. The care he shows to the other first year boys is especially apparent in his treatment of Jouji Nezu, who he values more than the other boys and shows more emotional concern about. The most lecherous member of the boys, Andre is also an extreme masochist which is used as a tool by the Underground Student Council to manipulate him later in the manga. This masochistic behaviour leads to a strong admiration for his main source of punishment and visual stimulation, the scantily dressed USC Vice-President Meiko Shiraki. However, he grows a fondness for Risa Bettou after she starts engaging his masochism as a dominatrix to the point of abandoning his friends to aid the Aboveground Student Council 's cavalry team in the All-Student-Council Cavalry Battle. The deviant behaviour he characterises throughout the series devolves into more sadistic behaviour towards Meiko later on which he refers to as "Andrenomics" or "investment-upon-return".

The enrollment of Andre at all-girls school Hachimitsu Academy initially proves a failure when he is unable to approach girls due to his masochism. The boys are all unable to approach a girl on the first day with the exception of a failed attempt by Kiyoshi Fujino. The voyeurism incident results in him being captured with the other boys on the school rooftop above the shower rooms. When the Underground Student Council lynch the boys and sentence them to one month detention in the Prison Block, they assign the sadistic but popular Vice-President Meiko Shiraki who captures Andre's admiration wholeheartedly. Though Kiyoshi prevents Meiko's violent attack on the boys and her attempt to make Andre lick the spit from her stiletto heel, this intervention angers Andre whose ultimate desire and life goal becomes the Vice-President's punishment. Though Meiko is replaced by USC secretary Hana Midorikawa, the replacement proves a failure thanks to Kiyoshi's accidental encounter with her while urinating in the school grounds.

Within Andre's imprisonment at the Prison Block, his evening labour slot is spent clamouring for Meiko's physical attention and engaging in playground games with Jouji Nezu and Shingo Wakamoto. In his incarceration, he initiates a diary of his masochistic experiences and prison life under the exacting wardenship of Meiko. Though Kiyoshi and Gakuto conspire to effect a breakout from the prison compound, the other schoolboys remain unaware of their conspirations - despite the presumption of a physical relationship between the two which is to Shingo's shock. The day of the track-club district meet tournament results in Andre exerting himself with trivia work in the sports grounds while Shingo and Jo slack off elsewhere. The revelation of Kiyoshi's breakout is to Andre and the other boys' utter shock, which they respond to by ostracizing Kiyoshi when they learn of his escape attempt.

The increased tension from Kiyoshi's treachery leads to Jo's raging assault on Andre after Andre tips over his ant farm. This incident is the prelude to the first DTO phase by the Underground Student Council in which Jo is manipulated into accidentally stabbing Kiyoshi to defend his ants from Mari's crow. Though he notices the frequent association of Shingo and Meiko in the warden office, Andre refuses to ostracize Gakuto and is envious of Shingo. The second phase of DTO involves Andre's deprivation of punishment and visual stimulation from Meiko which drives him mad. This unhygienic insanity culminates in his manipulation to break out of the prison compound's wire fence to Meiko result in a second escape attempt. However, his inhuman strength redeems him when he distracts the Vice-President in a arm wrestling tournament for a full five minutes - in order to facilitate their recovery of the DTO email evidence from Mari's computer.

The downfall of the USC corresponds with an upsurge in Andre's popularity, with much of the student body accepting his masochism. Though the other boys appear occupied with their new romantic interests, the caring Andre is only one to be concerned by Jo's attitude. This empathy and concern proves to be critical in preventing Jo's social isolation and re-incarceration in the Prison Block. Though Jo is intercepted by classmate Satou at the last moment, Andre breaches the pool locker room naked to elicit the occupants' scorn and narrowly avoid expulsion. The USC's transfer from dorm arrest to the Prison Block by the Aboveground Student Council is furthered by his recruitment to the guard duty alongside Gakuto. This strategic position allows him to devise an enact a ironically sadistic quid-pro-quo masochism theory that he names "Andrenomics" (アンドレノミクス, "Andrenomics"⃝ℹ) after Friedman. This cause prevents Andre from helping Kiyoshi when he is asked to help him retrieve the crows from the USC office.

Though the guard duty serves to further Andre's dream of masochistic returns from a released Meiko, his brutal acts including snatching Meiko's pants then knocking her out with the intent of intensifying Andrenomics. Though his final goal is to be severely beaten by her in vengeance, this desire is crushed when Meiko enters a short stress-induced illness resulting in the mental regression into her old timid middle-school personality. When Andre discovers the failure of Andrenomics, he becomes a mentally broken man once more upon seeing Meiko's regression and resists all Risa's dominatrix attempts. However, Risa and Andre successfully bond to assume a dominant-submissive relationship when he is left in a room with disgusting conditions and assumes a role as her "pet".

The day of the Sports Festival proves Andre's loyalty to Risa as powerful to the point of betraying the cause of the Wet T-Shirt Festival and forcing a win in the men's sprinting race. In the Cavalry Battle, the shortage of one member in the two Student Council cavalry teams results in Kate securing the now colossal and highly coordinated Andre to the ASC team. The lunchtime break allows Risa some time to practice her co-ordination with Andre, with his complete rejection of Meiko when she returns him the pair's frisbee.

During the cavalry competition, as the event continues to drag out, it was evident that only Meiko's revival to her harsher personality would allow the USC to compete with the ASC on more equal terms. Meiko revived just in time to challenge Risa's control over Andre, causing Andre to shut down for the remainder of the match. The match was eventually determined to be a draw.

After the cavalry match, Andre claimed to have no memory of what was going on during that event. He and Gakuto became popular among the girls in school. He continued volunteering himself to be subject to Meiko's physical abuse, much to the protest of Risa. Despite softly rejecting Risa, he instinctively ties up Risa's shoelaces and later responded to her commands like he did during the cavalry match, giving her a hope of reconciliation. However, Andre revealed that he was only pretending to be responding to her so as to placate Meiko, who he perceives to be disapproving of him being rude to his seniors. A depressed Risa left, but not before dumping a gift of shoulder pads she meant to give to Andre for his protection. Andre found the gift and realized his mistake. He decided not to go through with Meiko's barrel-throwing event, and ordered for a barrel to be sent to the BBQ venue instead. Andre found Risa hiding away in the dominatrix shop, and made his love confession to her, saying that she may not be a good queen, but she triggered his heart. Seeing that both of them have reconciled, the dominatrix shopowner sent them away to go on their first date. The pair was last seen happily running along the shores of a beach.

She is the girl who most appreciates Andre, and develops masochist tendencies, at the end of the manga they are seen on the beach happy.

The relationship between these two is sadomasochistic, when Meiko changes her personality to a more tender one, Andre begins to have delusions because he loses his sadistic vice president. 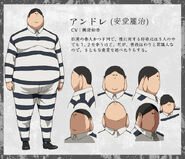 Andre in the manga

Andre on the Japanese debut cover