Volume 7 is the seventh volume of the Prison School manga by Akira Hiramoto, published on February 6th, 2013 in tankobon format by Kodansha.[1] An English graphic novel was published by Yen Press on July 19th, 2016.[2]

To the boys' utmost despair, their three breakouts endanger their continued attendance. In the Prison Block, the boys must procure email evidence of Operation Boys Expulsion (男子退学オペレーション, Danshi Taigaku Operēshon⃝ℹ) to prevent their imminent expulsions. However, they have many hurdles to overcome - an arm wrestling contest against Meiko & an impossible "Ass Riddle" from the Chairman?! Their fates hang in the balance with the explosive strength of the Vice President in top form and Hana's obsessive stampede... 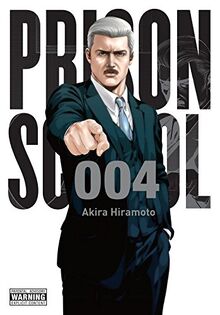 Retrieved from "https://prison-school.fandom.com/wiki/Prison_School_Volume_7?oldid=18772"
Community content is available under CC-BY-SA unless otherwise noted.