Volume 10 is the tenth volume of the Prison School manga by Akira Hiramoto, published on October 4th, 2013 in tankobon format by Kodansha.[1] An English graphic novel by Yen Press is awaiting publication on November 15th, 2016.[2]

The boys enjoy their school lives free from the Prison Block, until chaos ensues when the three senior Underground Student Council members are arrested by the shadowy official Aboveground Student Council. Their crime - physically mistreating the boys in their detention!? With their appearence comes clothes-tearing violence, memories of old history and male romance! What lies in store for the imprisoned USC - and for the enamoured boys? 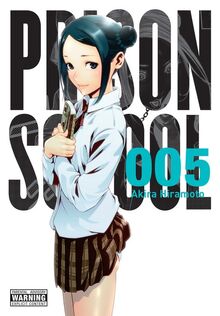 Retrieved from "https://prison-school.fandom.com/wiki/Prison_School_Volume_10?oldid=18775"
Community content is available under CC-BY-SA unless otherwise noted.