The Plastic Bottle Rocket (ペット・ボトル・ロケット, Petto Botoru Roketto⃝ℹ), codenamed the PBR, is a large plastic model rocket sculpture constructed by Gakuto, Jo and Shingo. The scuplture becomes the object of their devotion, until a single fragment survives its destruction and disposal by the Aboveground Student Council. The PBR fragment, nicknamed the Lady PBR (PBR様, PBR-sama⃝ℹ), leaves the altar of its anointment to become the jockey of the Underground Student Council's schoolboy cavalry team in the Cavalry Battle.

The Plastic Bottle Rocket is a large plastic model sculpture, versatile enough to both support a human and float within shallow water unaided. The original PBR's artistic design visually references a robotic rocket-powered figure, complete with cardboard wings and fake mechanical appendages. However, the PBR is unable to fly due to its cumbersome design and lack of technical functionality. The main body of the PBR is constructed from PET bottles, plastic bottle tops, duct tape and other household items.

The Plastic Bottle Rocket was initially intended to aid the Underground Student Council's breakout plan. The use of a plastic bottle diversion was devised by Mari with Kiyoshi before she contacted the latter by signalling rocketry in the sports ground. Though the boys carefully construct the PBR as a model sculpture in the school courtyard, the original intention Kiyoshi and Mari had was of a simplistic yet functional plastic bottle rocket that could actually fly. Though the boys seem engrossed in playing with the PBR in the swimming pool, Gakuto has a deep suspicion of their mistake - until he enters the pool and misses Kiyoshi's phone call. This misidentification by Gakuto inadvertently causes a severe disruption to the USC's plans when the three boys gradually become overly obsessed with the PBR's workmanship. Their humourous argument on whether to name the sculpture the misspelt initialism OU for Our Youth (Oretachi no Yume) or the PBR misnomer is a decisive victory for Gakuto when the PBR keeps its name.

The other schoolboys' neglect of the USC's breakout plan for the PBR is the cause of much worry from Mari and Kiyoshi, with the boys planning to use the PBR bouyancy to garner female attention in the annual summer camp. When Chiyo sees the boys working on the PBR in secret, she mistakenly associates it with her birthday. The boys decide to make further modification to the PBR, adding gargantuan legs to convert it from a rocket ship to a giant robot. However, the Aboveground Student Council discover the PBR obstructing the path of a corridor in the school courtyard, and dismantle it as a waste of resources. This incident provokes the three boys and Chiyo's collective revolt against the ASC. However, Joe collects the head fragment of the PBR and the boys construct an altar in the boys' dorm, making PBR a religious object of worship. Risa puts them on dorm arrest to limit their chances of aiding Mari and Kiyoshi. When Joe and Gakuto need to relieve themselves during the house arrest, Shingo prevents Gakuto from urinating in the wrong water bottle - i.e.: the PBR. Risa also slipped on the PBR during her attempt to attack the boys for verbally insulting her, which caused her to land on her head and knocking her out. This deepens the boys' religious devotion to the PBR.

The next day during the Sports Festival, Hana and Kiyoshi proceed to settle their urinating feud once and for all in the boys' dorm, hiding under the futons. Kiyoshi used the PBR fragment to cover his genitals but was forced to move it out of the futons for Gakuto and Chiyo's discovery so they can retrieve it and leave the boys' dorm. Gakuto took the PBR fragment to nominate as the cavalry jockey for the boys' team, and it turned out to be the unanimous winner from the votes of Gakuto, Shingo, and Joe. The PBR fragment is then strapped to Gakuto's chin above his head for the Cavalry Battle.

In the climax of the Cavalry Battle, the PBR fragment was loosened from Gakuto's head and was thrown around by the other students during the chaos. Gakuto desperately struggles to retrieve it back. The fragment's final role involved saving the students, where it was destroyed by a helicopter's rotating engines, altering its collision course to that of the prison.

After the Sports Festival, Gakuto proposed to Shingo and Joe to start building the PBR Mark II in hope of gaining favour from the PBR Goddess and thus redeem themselves in the eyes of the entire school cohort who had branded them as perverts during the Sports Festival. The boys managed to finish building PBR Mark II in time for Kiyoshi's BBQ event. PBR Mark II is in the form of a ship big enough for them to sit on. The PBR Mark II was last seen being rode on by the boys and girls who were sidetracked from attending Kiyoshi's BBQ, heading out to the sea. 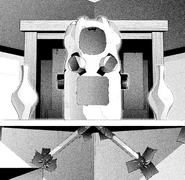 The altar of the PBR fragment.
Add a photo to this gallery

Retrieved from "https://prison-school.fandom.com/wiki/Plastic_Bottle_Rocket?oldid=18736"
Community content is available under CC-BY-SA unless otherwise noted.