Mitsuko Yokoyama ( みつ, Yokoyama Mitsuko⃝ℹ) is a supporting character of Prison School and one of 1016 girls in attendance at Hachimitsu Academy.

She is the love interest of Takehito Morokuzu (commonly referred to as Gakuto). Mitsuko is the secretary of the official Aboveground Student Council. She is also the cousin of Anzu Yokoyama, who is an ex-USC member.

Mitsuko is a beautiful, slim and short teenage girl with dark green hair that is tied in twin buns with bangs swept to the left side and emerald eyes.

She is seen wearing the standard school uniform, without a tie and sometimes dresses with an open collar and without the blazer when doing manual labor for the official Aboveground Student Council. She is often inadvertently seen with her skirt stuck inside her underwear.

Mitsuko is a extremely clumsy girl who befriends Gakuto due to their having embarrassing public situations in common. Like Gakuto, with her klutzy attempts at manual labor (and sometimes by sheer bad luck), she can start off huge chain-reaction accidents that usually result in minor injury for those involved.

Mitsuko displays a heavy interest in the histories of the Three Kingdoms, and displays 'otaku' behavior by staying in the library and collecting manga issues. Mitsuko has a shy and kind temperament, though she is confident enough to converse with Gakuto in the library when he attempts to avoid her. She has a crush on Gakuto, and begins to cry when she mistakes Jouji Nezu (Joe) and Gakuto as an 'item' and says she will cheer them on.

Notably, she is the only Student Council member to hold no grudge against the Underground Student Council. To Gakuto's shock, Mitsuko shows an interest in yaoi manga and becomes an novice manga-artist (or 'doujin sakka').

In Mitsuko's first appearance, she met with Takehito Morokuzu (Gakuto) in the school library when both of them reached out for the same book (a rare Three Kingdoms historical reference book) while in the History section. Mitsuko then approached him, and they had a conversation about the Three Kingdoms and their embarrassing situations (Gakuto's defecation in public and Mitsuko s clumsiness). She then confessed to having a similar 'accident' in her middle school. They begin to regularly meet in the library and talk about the Three Kingdoms when Mitsuko is free from her duties as the Aboveground Student Council's secretary.

Through a number of inexplicable chain-reaction accidents Mitsuko causes, a junior librarian fell off a ladder in the library multiple times. When she climbed up the ladder to reach a high-up book, she fell and Gakuto saw her ass from below as he caught her. When Gakuto comments on her clumsiness to the boys, they call her the 'Rube Goldburg' of klutzes, due to her small actions accumulating to create large collateral damages. Reiji Andou saw her underclothes when she filled a whole corridor with lard from a vat trolley she tripped over and spilled.

Anzu Yokoyama reveals to the boys in Mitsuko's absence that Mitsuko is her cousin, a member of the official Aboveground Student Council as its secretary, and explained to them that there are two Student Councils (an ASC and a USC). When Gakuto helped Mitsuko move the Student Council office documents and equipment to the old USC office, he described his relief at finding out she was not a USC member to her after she thanked him for his help.

Mitsuko goes on a date with Gakuto to the bookshop where she buys a few historical Three Kingdoms books and goes upstairs suddenly while Gakuto continues browsing the "Classics" section. When Gakuto opens her bag to compare wares with her, he discovers a pile of yaoi and a "Three Kingdoms" manga sandwiched between the books. An embarrassed Mitsuko immediately took the bag from him and closes it, before leaving on a hasty excuse. Gakuto tries to confront her about it numerous times, but she continually avoided the subject or abruptly ends the conversation to go to her duties.

A few weeks later, Mitsuko saw Joe and Gakuto acting out yaoi manga scenes (to try and understand her interests), to her shock. With Joe's encouragement, Mitsuko becomes a novice mangaka and makes her own yaoi manga portraying Gakuto and Joe as Kongming and Lu Bu from the Three Kingdoms histories, which Gakuto is not happy about. Believing that they are a secret couple to his dismay, she told him that she will cheer him on while in tears. When Joe sees the yaoi manga, he confesses that he loves Gakuto to Mitsuko's shock and continues to support her mangaka efforts. Mitsuko also saw Gakuto whipping a tortoise-shell bondage rope-wearing Risa Bettou in the library by her request, complicating their misunderstandings.

On the day of the Sports Festival, Mitsuko and Gakuto agreed to study The 3 Kingdoms together after the event ended. Mitsuko also competed in the All-Student-Council Cavalry Battle for the Aboveground Student Council team, where Kate Takenomiya, Risa Bettou, Andre, and her are the leading representative team for the ASC. She was largely a passive participant in Kate's team, but turned out to be the trump card in Kate's plan when Andre shut down and left the team immobile. Kate intentionally activated her clumsiness, this time causing a helicopter to nearly collide with the students but destroying the prison instead. The chaos forced the match to a draw.

After the event, Mitsuko was both upset by having to move back to her old office and Gakuto being too occupied to study the "Three Kingdoms" together with her. Mitsuko meets Kiyoshi Fujino and agrees to talk to Kate about sponsoring Kiyoshi's planned BBQ party if Kiyoshi manages to arrange a meeting between her and Gakuto. After waiting for a while, Mitsuko caught Gakuto cavorting with Bitch, and she stormed off in anger. Later on, Gakuto attempt to seek her forgiveness, where Bitch joined in and proposed a competition with her where the winner becomes Gakuto's girlfriend. Accepting the challenge, she went through all 3 tests and after completing the final test she decided that she had lost decisively due to forgetting about the hidden reference to the 3 Kingdoms in the final test. However, Gakuto's indecisiveness frustrated both her and Bitch, and they left him alone, with Mitsuko offering to teach Bitch more about the "Three Kingdoms".

His relationship with Gakuto is in a friendly tone due to the fact that they frequently interact to talk about their hobbies on the Three Kingdoms manga. However, due to her constant clumsiness, she is always involved in awkward situations involving Gakuto (in most cases), which ends up embarrassing her. 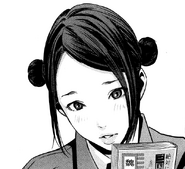 Mitsuko in the manga

Mitsuko on the Volume 9 cover

Mitsuko on the Volume 24 cover