Mayumi Tanaka (田中 マユミ, Tanaka Mayumi⃝ℹ) is a supporting character of Prison School and a first-year student in attendance at Hachimitsu Academy. She belongs to the same class as Chiyo Kurihara and Kiyoshi Fujino, and is a member of the school's Go Club.

Mayumi is slim and short teenage girl who styles her hair in a boycut.

She is usually seen wearing the standard female school uniform. In the dormroom she shares with Chiyo Kurihara, Mayumi is usually seen not wearing uniform in her and usually wears a white shirt.

The friendly character of Mayumi and her good friendship with Chiyo Kurihara is shown when she expresses concern about Chiyo when gloomy. While Chiyo relies on her for advice and mental support as a good confidante, Mayumi is a non-confrontational person and tries to avoid fights - thus inadvertently depending on Chiyo for physical defense and/or protection. Though she does not seems antagonistic towards the boys, Mayumi is apathetic towards Chiyo's interest in Kiyoshi & the enrollment of the five first-year boys in the school. In contrast to Chiyo's love of sumo wrestling, Mayumi shows an interest in clothes and magazines. However, Chiyo is completely oblivious to her disinterest in sumo wrestling.

The first appearance of Mayumi occurs when she interrupts Chiyo Kurihara's after-class conversation with Kiyoshi Fujino to leave the classroom together.[1] However, Mayumi is introduced by name in the locker room of the bathing area when she is preparing for a bath with Chiyo and their classmates. Though a fearful Chiyo is concerned that the Underground Student Council poster that the USC published forbidding any contact with male students will interfere with her sumo tournament with Kiyoshi, Mayumi presumes that it was a joke. The voyeurist Kiyoshi is mistaken for Mayumi by Chiyo in the bathing area, with Kiyoshi narrowly escaping detection in the resulting confusion. The news of the other boys' failed voyuerism attempt and lynching causes much panic when it spreads to the bathing area and the class leaves to the school courtyard.

In the Go clubroom a few days later, Mayumi plays Go with Chiyo where they listen to other girls expressing their disgust at the boys' previous act and commenting that the USC notice was real with the same consequence of imprisonment for people interacting with them. In the cooking clubroom the next week, a newly-arrived Mayumi teases Chiyo about the sumo tournament with Kiyoshi as a date with a prisoner while she is making a rice bentou. However, the date descends into disaster when Chiyo discovers her uniform and Kiyoshi's apparent cross-dressing habit. The whole weekend is spent by a miserable Chiyo continually sleeping in their dorm room and ignoring Mayumi's attempts to rouse her. When a hungered Chiyo awakens to go to the canteen with Mayumi having forgiven Kiyoshi, the rumors of Kiyoshi's impending expulsion prompts her timely intervention to prevent his withdrawal.

In the next week after Kiyoshi's jailbreak, the discovery of the USC's plot of DTO targeting the boy's expulsions by Chiyo spurs Mayumi to help her send them a warning message disguised in a Go boardgame. The ploy is successful when they deceive Meiko into thinking they moved the board outside and into the school courtyard for some fresh air. Though the boys attempt to prevent the third breakout by Andre, they fail when he destroys the wire fence of the Prison Block. The lone effort of Chiyo on the night of expulsion saves the boys despite the lack of Mayumi's support. In the school courtyard a few weeks after the boys are freed, Chiyo physically defends Mayumi from some bullying schoolgirls and is imprisoned within the Prison Block in turn.

In the Cavalry Battle on the day of the Sports Festival, Mayumi joins Chiyo's cavalry team on the Underground Student Council's side as leftward jockey. Kate repeatedly harassed Chiyo's team, where Mayumi was one of the recipients of her harassment. Kate reveals that Mayumi is an internet idol to her embarrassment, secretly broadcasting with a studio microphone and laptop webcam from the dorm room she shares with Chiyo and without her knowledge. Though Jouji Nezu gives Mayumi courage and denounces Kate for revealing her online identity without permission, an outraged Chiyo is provoked into attempting a self-destructive charge at Kate's team which results in their elimination.

On the day of the BBQ event, Gakuto, Joe, Shingo, Mayumi, Satou, and Anzu traveled to the venue only to get sidetracked into riding the boys' PBR-ship along the river. Mayumi continued video streaming the event for her fans, which unknowingly included Anzu's constant nipslips and eventually caused Mayumi's account to get banned. The boys and girls ended up playing in the water. The group was last seen riding on the PBR-ship to the sea, apparently having forgotten about the BBQ event altogether.

Chiyo is Mayumi's best friend and roommate who respects her compassionate nature, but she is neutral about her sumo obsession. When Kate Takenomiya revealed Mayumi's hobby as an internet idol to the entire school, Chiyo immediately rose to her friend's defense and supported her interests.

When Kate Takenomiya revealed to the school that Mayumi is the internet idol Makami Nayuta, it was Joe that convinced Mayumi to embrace her hobby and become a true idol. 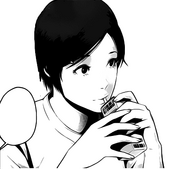 Mayumi in the manga

Mayumi on the Volume 22 cover

Mayumi in the baths (manga)