Episode 1
Mari Kurihara ( , Kurihara Mari⃝ℹ), nicknamed "Crow-User Mari" (カラス使いの万里, Karasu Tsukai no Mari⃝ℹ), is a supporting character of Prison School. She is third-year student in attendance at Hachimitsu Academy [1] the daughter of the school chairman and the older sister of Chiyo Kurihara who is a popular student due to her wealth, beauty and social power.

Mari is a tall and lithe young woman with back-length black hair that has two front shoulder-length hair strands hanging in the front with bangs swept to the right side, blue eyes (green eyes in the anime), full pink lips and she is frequently described as one of the most beautiful students in the school.

Mari is a proud and dignified student who exerts a sense of authority about her that lends to her popularity. Mari prefers the company of crows to people outside of her subordinates and closest friends that are senior members in the Underground Student Council, and she can control them.

Mari is well known for her intelligence, athletic ability, leadership abilities and all-round talent both in her middle and high school years. She is a calm and controlled character who displays intelligence and cunning throughout the series, as shown by her plan to exclude the boys through DTO and her later secret engineering to prevent the official Aboveground Student Council from destroying the USC with their subterfuge. Though Mari's strained relationship with her perverted father results in her misandry treatment of the boys,[2] she adapts to be able to socialize with the boys and empathize with them.[3][4]

However, Mari is a genuinely kind person deep down, as shown when she helped a younger Meiko Shiraki to become more confident and prevented her Kate Takenomiya (Mari's to-be arch-rival) for bullying her in middle school. Mari is also very close to Chiyo Kurihara (Mari's younger sister), whom she shared her childhood with even as she grew estranged from their father. She is also a graceful loser, as shown when takes punishment from the official Student Council and responsibility for physically abusing the 5 boys during their prison term, even praising Kate for her strengths though she is her arch-rival.

Mari is first introduced as the 20th president of the Underground Student Council whose vigilante organisation, the USC, polices the traditional school rules of the private school above its own policies of not speaking or entering into illicit relations with the boys. Thus, she clashes with her father, the Chairman, who supports male enrollment at the school and engages in an ass-fetish. When the boys intrude into a female-only bathing area, she rounds them up and incarcerates them in the Prison Block. There she co-ordinates the guard system, the security and their punishment (hard labor for one month). Mari continually increases the harshness of her punishments when she accidentally stumbles onto her father's pornography stash and online videos in his office.

When Mari discovered that Kiyoshi Fujino escaped prison just so that he can have a date with her sister Chiyo Kurihara, she tried to make Kiyoshi sign the school withdrawal form in lieu of one month extension of his prison sentence, but failed. Hence Mari began Operation Boys Expulsion, code named DTO, a conspiracy where they manipulate the boys to commit two more breakouts in order to gain the school's support to expel them. Mari entrusted Meiko Shiraki with the groundwork, which initially backfired with Takehito Morokuzu (Gakuto) but eventually succeeded with Reiji Andou (Andre) and Shingo Wakamoto. With DTO declared a success, the USC had an early celebration and they destroyed all hard copies of the conspiracy. The celebration proved to be premature when Mari found out that the Chairman gave the boys one-day extension to their imminent expulsion. Angered, Mari delegated Hana and Meiko with the task of stepping up the security on that final night to prevent the boys from doing anything that can help overturn the expulsions, and also participated in the monitoring herself. Despite the USC's last ditch efforts, Gakuto obtained the email evidence of DTO, by enlisting outside help from Chiyo and Anzu Yokoyama. The boys successfully exposed the conspiracy in front of the Chairman, forcing Mari to admit her role in it. Mari promptly accepts responsibility for the USC's actions and prevents Hana Midorikawa from beating Kiyoshi up.

The Chairman placed Mari and the USC on house arrest, subsequently agreeing with the Aboveground Student Council's proposal for a one-week imprisonment of the USC for their mistreatment of the prisoners. The ASC President Kate Takenomiya, who held a grudge against Mari ever since middle school, plotted to take everything away from Mari as part of her revenge and power-grabbing attempts. Anticipating this, Mari secretly installed Hana as a mole in the ASC. True enough, Kate began a smear campaign against the USC, framed Meiko for starting a massive fire, extended both Mari and Meiko's prison sentence by another week, and announced her intent to permanently disband the USC. Kate also sent Kiyoshi to prison, where she manipulated Mari and Kiyoshi into compromising positions, giving her blackmail material. Through this leverage, Kate used the blackmail material to force Mari into a final cavalry battle, facing the ASC.

With the school's Sports Festival the next morning, Mari faced the prospect of losing the USC as the defeated Student Council cavalry team would be disbanded permanently. Believing the blackmail material will be a disadvantage against the USC no matter what, Mari sought Kiyoshi and the boys' help to come up with her own escape plan. Eventually, Mari's escape plan turned out to be a bluff. Mari deduced that Kate didn't just have a simple grudge on her - Kate also wanted to be like her and had a crush on her as well. With this revelation, Mari proceeded to seduce her so that she would obtain blackmail material of her own against Kate. Having successfully nullified the blackmail against herself, Mari was able to ensure that the USC and ASC would compete more evenly in the School's Sports Festival. Reflecting on her past actions, she poignantly requested Kiyoshi to take her out for yakiniku when the USC wins the Sports Festival's Cavalry Battle.

During the Sports Festival, the boys took the side of the USC and discussions on the strategy for the cavalry competition ended up concluding only Meiko's Vice-President personality can save them. During the preliminary obstacle race between Hana and Risa Bettou, Mari agreed to Kate's bet that the president of the losing team, Kate or herself, will dance in public in casual clothes. The preliminary race ended up a tie, preventing any loser from having to dance in public. When the cavalry competition began, the extent of the USC's fall in popularity was apparent, with only 11 students on the USC's teams while the rest of the student body supported the ASC. Making it worse was that the USC's teams realized that their earlier strategy of reviving Meiko's fearsome Vice-President personality with carbonation doesn't actually work.

In light of this, Mari was forced to resort to increasingly desperate measures such as requesting Kiyoshi to expose his erection to the entire cohort of schoolgirls to keep them at bay. Throughout the competition, Mari repeatedly bent the rules in order to undermine Kate's team, with Kate doing the same. At the last minute, Meiko had a near-death experience where she managed to revert back to her confident Vice-President personality. This gave Mari's team the upper hand over Kate's team for once. Kate however, had one last resort up her sleeve - She activated Mitsuko Yokoyama's clumsiness, causing a series of events that led to the destruction of the prison and forcing the match to be declared a tie. While neither Student Council was forced to disband, the ASC were forced to move back to their old office while the USC took back control of their more prestigious office.

With the destruction of the prison, the Underground Student Council was effectively rendered powerless. Realizing that she had caused everyone enough trouble, Mari atoned for her actions by applying to go on a student exchange, and secretly left everyone without notice, not even attending the Get-out-of-jail BBQ that Kiyoshi had organized for the USC. She informed a skeptical Kate about her decision to leave school, while Kiyoshi and Meiko only realized and confirmed the truth of the claim right on the day of the BBQ. Upon this revelation, Meiko and Kate rushed to the airport in a failed attempt to catch up with Mari, while Kiyoshi interpreted Mari's move as a message that she gave her blessings to his and Chiyo's relationship, and rushed off for the BBQ and Love Confession instead. Mari boarded the plane, buying Kate's favorite snack to bring with her for nostalgia.

While boarding the plane, Mari's inner monologue indicates that despite her still believing in the motto "Men are garbage," her view on men has somewhat changed as she has come to cherish the time she spent with the boys. 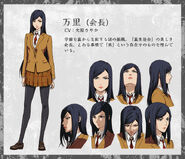 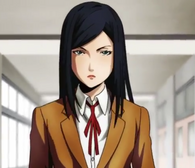 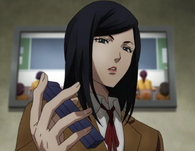 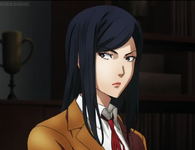 Mari watches as Meiko Shiraki is interrogating Kiyoshi Fujino during his escape in the anime.

Mari in the anime opening

Mari in the anime ending 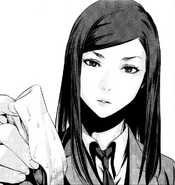 Mari in the manga

Mari with Chiyo Kurihara when they were young

Mari on the Volume 3 cover

Mari on the Volume 13 cover

Mari on the Volume 23 cover