Kate Takenomiya ( ケイト, Takenomiya Keito⃝ℹ) is an antagonist of Prison School and a third-year student in attendance at Hachimitsu Academy.[1] Kate is the president of the official Aboveground Student Council of the school. She was the main antagonist during the Sports Festival's main event.

Kate is slightly short and slim with a normal bust, scarlet hair and green eyes. She wears her hair in long drill curls, tied into two ponytails with burgundy ribbons. She has thin eyebrows and long curlicue-like eyelashes. Kate wears the standard female school uniform without stockings or socks.

While showing her cruel and sadistic self in doing so, Kate is a ruthlessly manipulative and shrewd student who acts to make gains at the expense of others. A sinister character who displays intelligence and cunning throughout the series, Kate has proven a dangerous enemy to anyone who crosses her.

In middle school, Kate was well known for her intelligence, combative ability (as a capable Aikido user), leadership abilities and talent - until she was surpassed by a newly enrolled Mari Kurihara. Though Kate was responsible for bullying a younger Meiko Shiraki in middle school for her large breasts, Meiko became more confident and was prevented from beating Kate up by her to-be arch-rival Mari. This indicates her bitterness towards Mari is due to her strong feelings of jealousy since childhood.

The middle-school incident is the cause of a serious inferiority complex driving Kate's actions, stemming from Mari's higher capability in every possible area in comparison. She is greatly motivated by her hate of Mari and a powerful urge of vengeance for the embarrassment that incident caused her. This hate eventually turns into a deep obsession with Mari that's sexual in nature. She is unable to resist Mari forcing herself onto her, and submits to various sexual acts with her (such as sucking Mari's breasts).

Ultimately, Kate has been shown to put indomitable effort into any task she sets upon herself which Mari praises by saying that she is a strong-willed person & hard-working. The kindness Kate shows to those who she considers friends is strong, as shown with her close relationship with her loyal aide and best friend from middle school Risa Bettou. Kate has also shown a few perversions, willingly engaging in foreplay with Mari when the latter films her for revenge, wearing Mari's stolen underwear from middle school and showing visible excitement while she is filming Mari and Kiyoshi Fujino in the bathing area of the Prison Block.

After the boys are freed by the Chairman from the Prison Block, Kate is introduced as the arch rival of Mari Kurihara who attended the same middle school. Initially it appears that Kate was only exacting justice on behalf of the boys, against the Underground Student Council. The background story was shortly revealed however, that Kate had a long-term grudge against Mari, which stems from their time in middle school. Kate used to bully Meiko Shiraki back in middle school, until Meiko befriended a younger Mari Kurihara and Mari convinced Meiko to defend herself from the bullying. This nearly resulted in Meiko beating Kate up, though Mari stopped her. With the revelation of the USC's conspiracy, Kate saw this window of opportunity to exact her revenge and with the approval of the Chairman, she had the USC's senior members incarcerated in the Prison Block. Kate's actions also serve to advance the affluence of the official Aboveground Student Council in the student body and school system, seizing the office of the USC and moving their equipment from their old office as a dilapidated shed in the school grounds. She engaged in smear campaigns to further bring down the USC's reputation and use subterfuge in order to disband the USC permanently. To add insult to injury, Kate assigns Takehito Morokuzu (Gakuto) and Reiji Andou (Andre) as their prison guards as a social experiment at the USC's expense.

Kate's revenge and power-grabbing attempts include befriending Hana Midorikawa and thus sabotaging the USC from within. Kate acts to imprison Kiyoshi Fujino, after he break into a room, and used this opportunity to spread rumors about Mari and her sister Chiyo Kurihara being promiscuous. She gained blackmail material in the form of footage of Mari and Kiyoshi sucking snake venom from each other's apparently venomous snake bites, so as to be able to challenge Mari in the Sports Festival where the loser will disband their Student Council permanently. When Chiyo discovers Meiko was being mistreated by the ASC, she attempted to report the incident to the Chairman, only to realize that Kate was one step ahead and arranged for Meiko to be released and undergo dorm arrest instead. Kate by now realized that Chiyo could be potential trouble too, and arranged to get a few girls to bully Chiyo to the point where Kate can show the Chairman Chiyo's retaliation on the girls so that she had an excuse to send Chiyo to prison for a short period. After Chiyo's release, she was furious that Kate would order the disposal of the boys' PBR, and attacks Kate. It was revealed that Kate was trained in Aikido, and hence she threw Chiyo instead. However, Kate had little time for Chiyo and the boys, and let the matter drop as she was busy in a psychological warfare with Mari. During Mari's time in prison, she had been plotting an "escape attempt", which was in fact a bluff. Mari correctly deduced that Kate has a secret obsession with her, which is revealed to be that of the extent of her Kate stealing Mari's panties and dressing up to look like her. Kate was manipulated to go up to her room together with Mari, who proceeded to seduce Kate. Kate initially resisted Mari's advances, even going as far to as to bite Mari's breast in protest, however, she was ultimately unable to resist Mari's sex appeal and blushes furiously at the prospect of going "further" with Mari. This culminates in Kate completely giving into her desire, initially engaging in sexual foreplay with her, and ending with both them ending up in an "ouroboros" (ウロボロス, "ouroboros"⃝ℹ) position. It is revealed that they had a sexual encounter, as they are both shown to have performed oral sex on each other. Afterwards, they are seen drenched in sweat and naked and on top of each other, with Mari claiming that they have finally become "one".

At the end of it, Hana (Who turned out to be sent by Mari to keep tabs on ASC) successfully obtained footage of this incident, which nullified the leverage the earlier footage (Taken by Kate) over Mari. Kate was therefore prevented from blackmailing Mari during the Sports Festival, allowing both sides to have a "fair fight".

On the day of the Sports Festival, a vengeful Kate still uses her Vice-President Risa Bettou to employ Andre as their 'mount' in the competition - convinced that Andre's size will ensure victory through unfair advantage. During the obstacle race preceding the All-Student-Council Cavalry Battle, Risa uses Kate at a last resort in her task to bring a friend to complete a part of the race. Before the race, she also bet with Mari that the president of the losing team, Mari or herself, will dance in public in casual clothes. At the judges' booth, Kate reaffirms her friendship to Risa by stating that she is not Risa's friend but her best friend. As a result, this leads Risa to understand that she has a friend in the present. Though Kate initially cheers for Risa's apparent victory in the obstacle course, the cheer was pre-mature - the race was declared a dead heat by the judges after Gakuto's appeal.

During the cavalry match, the USC and ASC supporters faced off against each other. Kate's earlier efforts in bringing down the USC's reputation was shown to be very successful, given that almost the entire school took the side of the ASC. With Kate's large advantage, Mari was forced to used desperate measures to keep the entire cohort of schoolgirls at bay, courtesy of Kiyoshi's erection, exposed genitals, and cross-dressing panties. Kate was eventually persuaded to get her army of schoolgirls to stand down, while her team confronted Mari's team directly. Throughout the match, Kate resorted to her own tricks to undermine the USC's teams as well, but ran out of options when Meiko's strong personality revived in time to shut down Andre for the rest of the match. Kate's team was left immobile, leaving Kate with the last resort of activating Mitsuko's clumsiness, which caused the destruction of the prison and ensured a tie between the ASC and USC. While neither Student Councils were forced to disband, the ASC was forced to move back to their old office.

Right before the day of the BBQ party, Mari told Kate that she is leaving school. A skeptical Kate went to investigate the claims by confronting Meiko directly on the day of the BBQ itself. It turned out that Meiko herself had no idea either, but a simple phone call revealed that the claim is indeed true - Mari will be leaving for a student exchange programme. Kate and Meiko immediately went to the airport together, on the way arguing with each other on who Mari likes more. They failed to catch up with Mari, and sat down together by the seashore in silent regret. 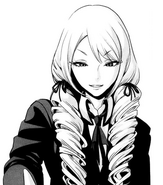 Kate in the manga.

Kate on the Volume 11 cover

Retrieved from "https://prison-school.fandom.com/wiki/Kate_Takenomiya?oldid=18658"
Community content is available under CC-BY-SA unless otherwise noted.