Full of Bodily Fluids (体液がいっぱい, Taieki ga Ippai⃝ℹ) is the 9th episode in the Prison School anime, which premiered on Tokyo MX on September 4th, 2015. The episode covers Chapter 56 through Chapter 61 of the manga in plot.

In the USC office, Meiko falls to the ground after her underwear breaks on the door handle. After being helped up by Mari, she refuses an offer of Hana to wear her leggings. In the Prison Block, Shingo states that he saw "DTO" on the screen of an email program on the guard office computer. The boys decide to recover email evidence of DTO to prevent their imminent expulsions. However, they abandon hope after realising the USC probably deleted the data. At this point, Gakuto states he can retrieve the data through use of a recovery program if given time. Though the boys begin to lose hope of accomplishing this in two weeks, Kiyoshi rallies them with the prospect of the Wet T-Shirt Contest.

While discussing possible methods to obtain the data the next day in the Prison Block, the boys realise that they need more time to enter the guard office. The next day in the courtyard, the boys are confined to the Prison Block for personal study and realise that Meiko's surveillance is too tight. With Meiko delivering news of the faculty's unanimous decision in favour of the boys' expulsion, they came to the conclusion the only way is to steal the key of the guard office from Meiko. The boys state it impossible to take the key by force, Gakuto says they will use Meiko's force against her by distracting her in an arm wrestling contest. At this point, Gakuto plans to secretly enter the guard office to retrieve the data during the contest while the boys continue to distract her.

When Meiko is in the corridor next to the mess hall of the Prison Block, the boys begin playing arm wrestling and provocate her with their claims of Andre being the strongest in the school as Meiko is only a girl. Their claims force an incensed Meiko to enter the cell and challenge Andre to an arm wrestling match. Gakuto says she will have to defeat him first in order to challenge Andre while revealing his muscled physique. Before their match begins, Kiyoshi is unable to take her jacket for the keys. When their match begins, Meiko quickly defeats Gakuto and bends his arm in the process before Kiyoshi challenges her to defeat him too before her match with Andre. From the corridor of the mess hall, Gakuto begins to travel to the guard office to retrieve the evidence.

As the match begins, Kiyoshi struggles to keep his arm up against Meiko's power and the table collapses after being kicked by a boy in an act of sabotage. Though he challenges her once more, a resisting Kiyoshi continues wrestling her and puts up a better struggle only to be overwhelmed by her strength and the distraction that her nipples pose. An unenthusiastic Shingo is forced into a instant and decisive loss after failing to distract her with fictional stories about his arm-wrestling prowess. When Jo challenges her despite her warning, the power of her single fluid movement sends him against the wall. As a result, Meiko challenges Andre as the last contender in their contest with all the other boys defeated and six full minutes left.

After the other boys are defeated by Meiko, she notices a loose hair on Andre's nipple and is disoriented by its long length before Andre assumes his stance. When their match begins, Andre and Meiko continually trade arm positions with Meiko being unable to fully overpower Andre. Though Meiko appears to have more strength than Andre, her grip is countered by Andre's efforts. Unbeknownst by the boys, his long hair sways in his breath as a distraction resulting in a comeback for Andre. At the office, Gakuto manages to download the software onto the computer but the installation becomes slow to his frustration. As Meiko continues to struggle against Andre, her stream of insults and spit begins to excite him which weakens his grip. Though Meiko weakens due to the nipple hair, she realizes that closing her eyes will allow her to force a victory.

Just as Andre loses to her, Gakuto arrives in the mess hall to the boys' relief. When Kiyoshi asks if Gakuto managed to recover the data, Gakuto states he only recovered the deleted data and couldn't access the email because he heard screaming and returned in a hurry. The boys realized with horror that their imminent expulsions were inevitable. In their cells at night, the boys voice their regrets and that they shared many moments together. The boys' recollections become more deeply emotional when they realize the brotherhood they have formed in their time at the academy, now consigned to their fate with their school lives at an end. 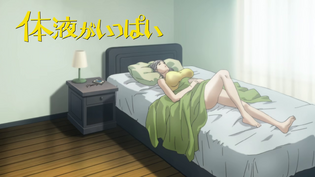 Retrieved from "https://prison-school.fandom.com/wiki/Episode_9_(Season_1)?oldid=16127"
Community content is available under CC-BY-SA unless otherwise noted.