The Diary of Andre

The Diary of Andre

The Diary of Andre (アンドレの日記, Andore no Nikki⃝ℹ) is the 8th episode in the Prison School anime, which premiered on Tokyo MX on August 28th, 2015. The episode covers Chapter 47 through Chapter 55 of the manga in plot.

The experience of one week without punishment leaves Andre mentally and physically broken. The boys show concern for Andre's bizzare mental state of self-seclusion and a severe lack of hygiene. At the guard office of the Prison Block, Meiko gives free time to Shingo again warning him that a late return after his curfew of 6:30 will be considered a breakout. Before leaving, Shingo completes prison labour in the courtyard at a distance from the other boys until Kiyoshi approaches him to his surprise. With his suspicions of the peculiar events surrounding the boys, Kiyoshi asks him to request his help if Shingo is blackmailed by Meiko in their meetings. However, Meiko interrupts by sending him to the office so that he can leave. At the cinema for his date with Anzu, Shingo is offered a drink by her and they confront each other over their "fear" of the horror movie until it begins. When Meiko assigns the four boys to service the Prison Block barricade's entrance, they pass Mayumi and Chiyo playing Go outside. Despite Meiko's ignorance of their true purpose, Kiyoshi saw Chiyo's written katakana message to him cunningly disguised in the pieces of their boardgame.

When the boys are bathing in the shower block with Andre still absent in his cell, Kiyoshi continually tries to decipher the message. At the girl's shower area in the main building, a Mayumi and Chiyo worriedly discuss their apparently message in the hope of him receiving it. At the cinema, Shingo and Anzu's movie The Grapes of Wrath is revealed to be a historical realist film to their boredom and they leave the movie screening to go to the park. In the baths, Kiyoshi explains his fears of the USC's plots to Gakuto from the last event and shows him Chiyo's message that he failed to decipher. However, a shocked Gakuto quickly discovers that the message was written vertically as top-to-bottom. Having previously read it horizontally as left-to-right, Kiyoshi deciphers the katakana message as "Boys Expelled Today" (ダンシ キョウ タイガク, Danshi Kyou Taigaku⃝ℹ) and correctly determines that the USC is plotting their expulsion at Andre's expense to Jo and Gakuto's shock.

While the boys were bathing, Andre heard the voice of Meiko from his cell and followed it in his delirious state. After entering the guard office of the Prison Block, he found his diary with completed portions by another author predicting that he would receive punishment after leaving the office. When he exits to go outside, the boys realise the USC is targeting him and go looking for him hurriedly. In the courtyard, Andre saw Meiko who angrily states her intent to give him severe punishment as her tight uniform bursts only to return to normal. In maddened desperation, Andre rushes to the Vice-President only to be blocked by the barbed-wire barricade without stopping. After hearing Meiko's encouragement, he breaks though the barbed of the barricade as the boys on the scene urge him to stop having arrived on the scene. Though he receives a whipping in punishment from Meiko, he is then suddenly knocked to the ground by Hana as Meiko declares a prison break. The boys realise the extent of the USC's deception when Gakuto remarks that the barbed wire in that area had been partially cut. While rejoicing the success of the DTO's second phase, Mari alludes to the missing Shingo's treachery and the significance of his return.

In the park after the movie, Shingo and Anzu comment on their boredom when the movie turned out to be a historical monochrome film. A hopeful Shingo is about to nearly kiss Anzu after she makes a remark about his perverted look. However, he leaves to confront two young boys who were bullying another boy for having played with a girl by throwing sand on him. After the boys accuse the boy of being a traitor to them by breaking their rule not to speak to girls, he shouts at them to tell them that they should forgive him as their friend. In a turn of events, the bullied boy throws sand at Shingo to stop him from apparently bullying the others. As Anzu congratulates him for his intervention, a distraught Shingo realizes his fault of abandoning the boys in their prison labour and betraying their secrets to date a girl. At this point, a tearful Anzu confesses to being ordered by Mari to keep Shingo from returning to the Prison Block before the curfew in return for an executive position the next year to his shock. Though Shingo doesn't panic at first as he had thirty-five minutes left before the time limit according to his timepiece, Anzu told him she delayed the watch by half an hour during the movie and that he has only five minutes left to his horror. At the courtyard of the Prison Block, the USC members inform the boys of Shingo's absence and curfew, expecting him to arrive late. The boys begin to lose hope for his return, but Kiyoshi rallies them to believe and shout in order to reach him with their feelings when Meiko informs the boys of the school summer Wet T-Shirt Contest.

When Shingo rushes across a road to reach the school, he appears to be hit by a truck as Meiko mockingly beats the boys in the courtyard while holding a pocket watch. However, it is revealed that Shingo jumps before the collision with the van, and Shingo found that the driver is the school cleaner who was insulted by Gakuto. As the time limit draws closer and the USC welcomes their imminent judgement, all of them are surprised when they see Shingo arrive at the school having been driven by the cleaner. To the the boys' delight, Shingo reaches the door of the barricade but is unable to open the door. When the timepiece reaches 06:30 and DTO becomes a success, Shingo objects to the door's apparent malfunction which Meiko rebuffs by revealing the new operation of the door, a fact that Shingo was unaware of due to the boys' repairs that day. As a result, Mari notes that the boys will be indeed expelled to the USC's utmost satisfaction and rumours spread across the student body suggesting so.

In the mess hall of the Prison Block, Shingo apologises expecting the boys to violently punish him for his hypocritical treachery but the boys forgive him happily with Kiyoshi first and foremost in this regard. However, the boys violently beat him up when he reveals that he saw her downblouse out of jealousy. At the Chairman's office, Mari presses her father stating they should be expelled according to the USC's rules. An apologetic Chiyo leaves the office after both Mari and Meiko deny Chiyo's accusations of plotting DTO to expel the boys. The Chairman says the faculty will be gathered to discuss the boys' expulsion in two week's time. In the USC's room, the USC hosts a party of the three senior members to celebrate their sucessful engineering with Meiko attempting to make fifty pullups from the doortop. When she nearly finished however, the door is open by Anzu who apologizes for revealing the truth to Shingo, but Mari accepts her apology and releases her from the room. After Anzu is gone, Mari suggests to Hana and Meiko to place Anzu under surveillance though Meiko has her panties hanging on the hook of the door. In the Prison Block, the boys decide to procure evidence of DTO to prevent their imminent expulsions, and Shingo mentions having seen DTO at some time. 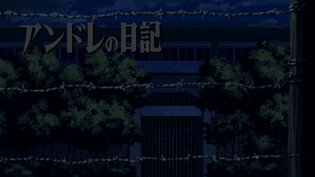 Retrieved from "https://prison-school.fandom.com/wiki/Episode_8_(Season_1)?oldid=15918"
Community content is available under CC-BY-SA unless otherwise noted.