Meiko's Delicious Restaurant (芽衣子のおいしいレストラン, Meiko no Oishī Resutoran⃝ℹ) is the 7th episode in the Prison School anime, which premiered on Tokyo MX on August 22nd, 2015. The episode covers Chapter 41 through Chapter 47 of the manga in plot.

When Shingo gains permission to leave campus from Meiko, he begins playing games at an arcade center. Though he is seen by second-year student Anzu who recognises his uniform and asks him why he is outside the Prison Block, Shingo answered with being on an errand. The two confront each other with Anzu revealing that she is top-ranked in the fighting game he was playing before leaving with her friends. At the guard office in the Prison Block, Shingo contemplates his first ever conversation with a schoolgirl while changing until he is interrupted by Meiko's arrival. On her command, he produces a carbonated root beer bottle from the refrigerator that bursts in Meiko's face to her displeasure. When he goes to the toilet after their meeting ends, he discovers the falchion from Gakuto's figurine on the floor.

That day at lunchtime in the courtyard, the male prisoners except Shingo play together with Kiyoshi as the former is asked by Meiko for intel about the boys. At first Shingo is unable to produce any information when Meiko begins cooking chicken nuggets with the peanuts he bought before. As he wants to eat Meiko's chicken, he procures the falchion he found in the toilet and hands it to her. When she heard it was in the toilet, she tosses it away and it lands into the food. At the USC's teatime, Hana reports that she saw Gakuto searching something in the toilet. As Mari begins eating Meiko's chicken nuggets, she found a falchion in her mouth to Meiko's horror, who decides to withhold the fact that it was in the toilet. However, Mari astutely identifies it as a minature Chinese blade. After a computer search for the source of the blade, Meiko discovers the hidden figurine in the cubicle and realizes the role of Gakuto in Kiyoshi's escape. A thankful Shingo recieves permission to leave campus again from an elated Meiko.

As a result of the lost toy sword, Gakuto becomes depressed and stays inside the Prison Block at lunchtime. At his next leave, Shingo returns to the arcade and meets Anzu again when she helps him win his game. After she accompanies him on his errand, they eat ice cream together in the cafe. At the table, Anzu invites Shingo to watch The Grapes of Wrath with her which he mistakes for a horror B-movie. Though Shingo claims to be unable to go, Anzu encourages him to do so as it will be deprogrammed soon. At the courtyard of the Prison Block, Meiko presents a single peanut to each of the boys but she gives Gakuto the falchion at his turn. With Mari watching, Meiko reveals she has discovered the collector figurine and its limited-edition status to Gakuto's horror. Deducing that it was exclusively purchased by Kiyoshi at the Akihabara convention, Meiko correctly concludes that Gakuto would have been complicit in the breakout scheme in exchange for the figure. To pressure Gakuto into confessing, she then begins to sit on the horse figurine and also ride the figurine as well to crush them. Gakuto is torn between saving the figure to admit his participation in Kiyoshi's jailbreak, or watching his precious figure being destroyed. Having come to a decision, he dived to grab the figure resulting in Meiko & Mari assuming he had admitted his guilt. To everybody's shock however, Gakuto smashes the figure in the ground and repeats his claim of lacking interest in figurines before returning to work.

When a shocked Kiyoshi hurries to go to him, he reminds him that he sacrificed his adolescence for the figurine. However, Gakuto reaffirms that his traditional values of loyalty in their friendship are more important than his figurines. With tears streaming from his eyes, Gakuto apologises for ignoring the ostracism of the other boys which Kiyoshi accepts. After Mari concludes that the plan to force Gakuto to confess to his complicity has failed, Meiko apologizes for its complications profusely. At that point, a late Shingo returns with a root beer and recognizes the toy blade from Gakuto's figurine on the ground. To Mari's horror, he identifies it as the toy blade he found in the toilet and she faints to Meiko's shock. After Meiko repeatedly apologizes to Mari and begs for a punishment, Mari declines punishing her. At the USC's room while Mari informed Hana about the incident with Gakuto, Meiko arrives begging to be whipped in punishment and is ignored. Upon the failure of Meiko's plan, Mari takes command of DTO. After their meeting when Meiko is alone in the room contemplating her unpunished failure, Hana enters in order to give her a clothes package to wear by Mari's command.

Meanwhile in the Prison Block, an apologetic Gakuto reveals his role in Kiyoshi's escape and ask forgiveness for his prior silence. In response to his confession, Shingo immediately labels him a 'traitor' and calls upon Jo and Andre to support his intention to severely punish Gakuto. However, Joe refuses to abet him as the USC failed to discover his role, a decision which Andre agreed to follow. Angered at this, Shingo involuntarily risks revealing himself as the USC's informant by mentioning that the figure was in the toilet to the boys' suspicion. However, he lies to successfully conceal his involvement in the plot before leaving the room claiming he will not forgive Gakuto. The suspicious boys note his regular disappearances with Meiko however, with Andre envying him.

At the courtyard of the Prison Block during their work detail the next day, the boys are surprised when Meiko begins supervising them wearing a tight uniform concealing her panties and breasts. To Andre's dismay, Meiko refuses to punish him even when he refers to her as his mother. Throughout the following days, Andre's many mistakes and desperate ploys are ignored by her as well. Deprived of his usual punishment, he writes his mental desolation in his diary which is read by Mari at the USC's meeting. Later, in the school's corridor, Meiko nearly faints due to her tight uniform and is transported to the USC's office by Chiyo. When she sees the front page of a report on DTO with the title "Boys Expulsion" (男子退学, Danshi Taigaku⃝ℹ), she is interrupted by the arrival of Mari and Hana in the room and leaves in fear. Mari announces to Meiko and Hana that DTO is to enter its final step while a shocked Chiyo is eavesdropping to the conversation outside. 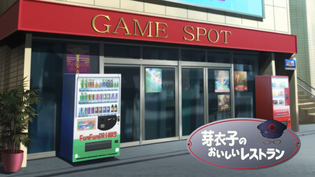 The dubbed version of the episode attracted controversy for inaccurate scripting of a line. Funimation scriptwriter Tyson Rinehart replaced the second line of Anzu's confrontation with a cultural reference to the Gamergate controversy and sitcom character Arthur Fonzarelli.[1] Funimation released an official statement to justify the variation of the script as a localised version of their translated subtitles with a disclaimer as to the error itself. [2] However, blogger Brandon Orselli commented on the outdated nature of the cultural reference and the scriptwriter's continued support of the line despite complaints by watchers on Twitter. [3]

Retrieved from "https://prison-school.fandom.com/wiki/Episode_7_(Season_1)?oldid=15910"
Community content is available under CC-BY-SA unless otherwise noted.