Vengeance is Hana's (復讐するは花にあり, Fukushūsuru wa Hana ni Ari⃝ℹ) is the 6th episode in the Prison School anime, which premiered on Tokyo MX on August 15th, 2015. It covers Chapter 35 through Chapter 40 of the manga in plot.

After Hana returns to the USC's office, Mari and Meiko inform her of their plan "Operation Boys Expulsion" (男子退学オペレーション, Danshi Taigaku Operēshon⃝ℹ) to expel the boys by inducing three breakouts. The USC's plot involves making each schoolboy create problems and then turn the public opinion of the student body and faculty against them to facilitate their expulsion. However, Mari again uses the phrase "Operation DTO" which has double usage of the word 'operation'; Hana corrects her a while later to "DTO" before Meiko is able to. They conclude to use Shingo's resentment against Kiyoshi and the internal turmoil among the boys to execute DTO.

After the prisoners' work detail is complete, Shingo is held back by Meiko instead of returning into the Prison Block. At the guard office, Meiko assigns him to a personal task after he ate the cake she offered to him. At the boys's changing area in the Prison Block, Kiyoshi tells Gakuto that he is able to endure their exclusion of him without his help. However, an ashamed Gakuto left the shower as soon as Shingo returned. The next day at work, the boys are heavily beaten except Shingo and Andre. In the mess hall of the Prison Block, Jo nearly beats up Andre after he involuntarily pushes his ant farm over and is restrained by Kiyoshi and Gakuto. At the guard office that day, Shingo meets the Vice-President, inadvertently telling her of the incidents of the past day and the rising tension between the boys in return for good food. However, Meiko blackmails him with the boys learning of his treachery to become her informant before allowing him to leave. Afterwards at the USC's office, Meiko reports Joe's protective attitude toward his ants to Mari, who decides to add Jo's ants to their plan and continue pressuring the boys to increase their stress.

When the boys have their lunchtime break the next day, they play in the courtyard of the Prison Block after Jo and Andre both apologise. However, the boys continue to ignore Kiyoshi who decides to nap alone. To his surprise, Kiyoshi notices the large volume of crows in the sky and the odd presence of all three USC members while leaning on the wall. While half-conscious, he also notices Shingo quietly speaking with Meiko under the trees. After their conversation, Shingo calls Jo away from his ants on the pretence of a maths problem. As they are talking, Jo is alerted that crows are attacking his ants. Though he rushes to them, he is blocked by Meiko who forbids him from touching Mari's crows. In desperation, Jo shoves her aside but is kicked to the ground by Hana.

As he watches the ants being eaten by the crows in horror, Mari enters the courtyard and states that Jo will be severely punished for attacking a USC member. When she orders Meiko to place him in solitary confinement, Jo blames Mari for the actions of her crows and charges toward her with a wooden knife. As Kiyoshi quickly ran to prevent him from reaching her, the two fall to the ground and the knife becomes lodged between Kiyoshi's buttocks. Despite the pooling blood from the wound, Kiyoshi claims that he landed on a tree branch on his own and his haemorrhoids affected him. Jo is placed in solitary confinement for the crime of attempting to attack Mari while Hana takes the wounded Kiyoshi to the nurse's office. Before being left in the detention room, Mari reveals to Jo his ants are alive and that the crows were "anting",[Note 1] an natural phenomenon that Jo ignores.

At the nurse's office, Kiyoshi disinfects and cleans the wound alone on the hospital bed. As Kiyoshi has already removed his pants, Hana decides to exact her revenge and orders him to urinate right in front of her. Kiyoshi struggles to resist Hana's efforts to force him to urinate and with less time, she decides to stand up above him and urinate on him. However, they are interrupted by Chiyo entering the room and quickly hide under the bed in terror. Chiyo pulls the curtain that were hiding the hospital bed, with the two in close proximity and their lower halves exposed. Kiyoshi's discomfort and excitement makes him stiff to Hana's embarrassment. Though Chiyo finally leaves the room and he attempts to beg forgiveness after exiting from below the bed, Kiyoshi realizes that she had fainted.

While at his office, the Chairman recieves an online delivery package when Mari arrives to report Jo's incident. During Mari's report, the Chairman points out that she has disproportionated the situation when his office phone rings on his desk. Though she suggests that he should go to receive the call, the Chairman stays seated on the chair as he is hiding a fetish mouspad. After Mari questions him about his strange behaviour, he finally leaves to respond to the call while physically concealing the package in an effort to disguise it. However, Mari saw the mouse on the chair which had fallen out of the unsealed box. When the Chairman returns and discovers that she has seen the mousepad, he attempts to make excuses but she feigns indifference and leaves with a slam of the door. In the corridor, an enraged Mari concludes that DTO must be intensified.

At the guard office, a confused Shingo questions Meiko about the questionable nature of his role until he concludes Jo was set up by the USC. But Meiko threatened to reveal his "betrayal" to the other boys and the good food he had eaten at their expense. The next day, Jo is freed from solitary confinement and prevents Shingo from bullying Kiyoshi during the prisoners' work break when Shingo orders Kiyoshi to bring water. Afterwards, Jo thanks Kiyoshi for the intervening in the incident and they have a casual conversation about it, though Kiyoshi is unable to reveal his suspicion about Shingo's role in the strange events leading up to it. Alhough a patrolling Hana suspects Kiyoshi for their previous encounter, she has forgotten her time with Kiyoshi under the bed. When Shingo is taken to the guard office later on, she states to him he will now have permission to leave campus for two hours of free time and issues him his uniform. 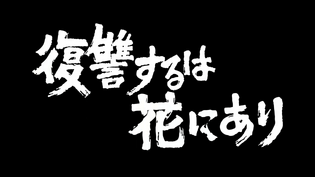 Retrieved from "https://prison-school.fandom.com/wiki/Episode_6_(Season_1)?oldid=16344"
Community content is available under CC-BY-SA unless otherwise noted.