The School's Number One Most Treacherous Man

The School's Number One Most Treacherous Man

The School's Number One Most Treacherous Man (学園一の裏切り男, Gakuen Ichi no Uragiri Otoko⃝ℹ) is the 5th episode in the Prison School anime, which premiered on Tokyo MX on August 8th, 2015. It covers Chapter 29 through Chapter 35 of the manga in plot.

When Meiko smashed the door down, she and the two boys found Kiyoshi on the toilet crying a lot. Assuming his absence was due to haemorrhoids and truancy respectively, both Meiko and Shingo leave. Gakuto dives towards Kiyoshi, greatly happy that he made it back in time. However, when he heard Kiyoshi's self-disparaging remarks while still crying, Gakuto assumes Kiyoshi didn't bring the limited-edition figurines and shouts at him to go back. Kiyoshi reveals that he indeed brought the figure to Gakuto's epic delight, but didn't tell him about his failed date as Gakuto states they will talk about that later in order to avoid drawing attention.

However, as Kiyoshi and Gakuto came out of the toilet building, they are addressed by Mari who is flanked by Meiko and Shingo. Mari asks Kiyoshi if he enjoyed the sumo match, much to their horror. Kiyoshi feigns ignorance but Mari shows them the photo of Kiyoshi and Chiyo together that shocks Kiyoshi. Mari reveals that Chiyo is her little sister, and then correctly guesses hat the escape method he used was crossdressing. Meiko checks Kiyoshi's bag, and not only found Gakuto's hair, but also Chiyo's uniform that was used as the disguise. Mari is disgusted by Kiyoshi, leaving before Meiko who tells Kiyoshi the punishment will be hard as he not only escape but soiled Mari's sister. In the meantime, the others boys who listened the conversation are angry as their sentence had been lengthened; Shingo hits Kiyoshi in the face and yells at him while he is on the ground until he had to be restrained by Andre. Shingo, Andre and Jo then depart in disgust, leaving Gakuto and Kiyoshi behind. A depressed Kiyoshi is then put in the detention room as solitary confinement and is warned he will be interrogated.

At the interrogation room, Kiyoshi claims he acted alone and took Chiyo's uniform without knowing it. After that, Mari goes to the girls' dorm & tries to speak to Chiyo but the latter shut herself inside her dorm room. The next day, Mari announces his decision over the escape attempt in the Prison Block; the four boys will have their sentences extended one month while Kiyoshi will be expelled. Back at the mess hall of the Prison Block, Gakuto tries to defend Kiyoshi to no avail. However Shingo rejects Gakuto's plea & angrily tells him it Kiyoshi's fault while the two others agreed to this. A betrayed Shingo consecutively accuses Gakuto of having helped Kiyoshi in his escape, which Gakuto denies prior knowledge of. After Meiko escorts Kiyoshi from solitary confinement, Mari decides to force Kiyoshi to fill a expulsion petition as she don't have the authority to expel him. While a regretful Kiyoshi was in the confinement room however, he decides to leave the school and consigns himself to his expulsion being for the best. At the girls' dorm, Chiyo finally gets up as she is hungry and goes to the canteen with Mayumi. While conversing with Mayumi, she tells her surprised friend that she maybe assumed Kiyoshi's intentions too quickly. Chiyo then heard other schoolgirls conversing about Kiyoshi's imminent expulsion.

At the USC's room, Mari tenders a expulsion request to Kiyoshi that she instructs him to fill, telling him if for his own good. Though she stops Meiko from intimidating him, Mari warns him that stories that he stole a uniform and dressed up as a girl will spread quickly and he will certainly be treated as a pervert for rest of his high-school years. Kiyoshi nearly fills the request but is stopped when Chiyo suddenly enters the room, protesting that kicking him out from the school is unjust. Chiyo rationalises that if he is guilty of illicit sexual conduct she is guilty too, before stating she will leave the school if Kiyoshi is expelled as well. When Meiko tries to whip him, Chiyo involuntarily put Kiyoshi's head against her breasts while shielding him. Mari admits defeat when Kiyoshi changes his mind and refuses to sign in the hope of redemption, thought she refuses Chiyo's claim about Kiyoshi's kindness. While thinking that he must have a moment like feeling Chiyo's chest again, Kiyoshi decided to not leave the school. However, when he came back to jail he found that he is ostracised by the rest of the boys led by Shingo.

Before going to the shower room, Mari tells Meiko she will have not only Kiyoshi expelled, but all the boys removed from the school roll. During a school history lesson in the Prison Block, Shingo (and possibly Jo) threw eraser flecks at Kiyoshi until he tells them to stop. Meanwhile in the cell corridor, Meiko enters in the boys's cells and try to found their weakness according to Mari's orders. The next day during the prisoners' labour shift, Meiko assigns the boys to group themselves and complete maintenance of the athletics storeroom and the toilet near it. Shingo forces Gakuto to leave Kiyoshi alone in his task of cleaning the toilets while they go to the athletics storeroom. At the same time, Meiko reports her observations from the investigation to Mari who types into her computer "plan DTO"; naming the plan to expel the boys "Operation Boys Expulsion" (男子退学オペレーション, Danshi Taigaku Operēshon⃝ℹ). However, Mari corrects herself a while later to "DTO" before Meiko is able to, as the phrase "Operation DTO" has double usage of the word 'operation'. The two remark that Hana is late.

As Kiyoshi waits outside the toilet building for the person occupying the cubicle, he surprisingly met Hana who came out and cornered the frightened Kiyoshi in the building. However, she leaves while promising to take revenge after a protracted argument & a fearful Kiyoshi saying that she is not a monster. At the USC's office, the Underground Student Council drink tea as Mari shows a smile & crows ominously flock in the window. 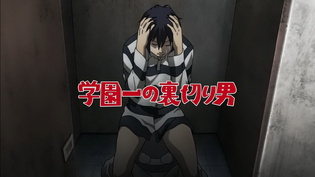 Retrieved from "https://prison-school.fandom.com/wiki/Episode_5_(Season_1)?oldid=15827"
Community content is available under CC-BY-SA unless otherwise noted.