A Mighty Spurt (大噴出, Daifunshutsu⃝ℹ) is the 3rd episode in the Prison School anime, which premiered on Tokyo MX on July 24th, 2015. It covers Chapter 13 through Chapter 20 of the manga in plot.

As the Vice-President rarely patrols the waste disposal area, Gakuto and Kiyoshi finally decide during lunchtime to do a practice run by the escape hole they made. Gakuto plans for Kiyoshi to stay out for a least one hour but be back as soon as possible and check his escape route. Meanwhile, the Chairman decided to seal his large photo collection of South American ass in his duty as a father and educator and came to bury it near Kiyoshi's location. To Kiyoshi's horror, the Chairman blocked his path of return to the escape hole. In the meantime, Meiko asks Gakuto where Kiyoshi is and doesn't hesitate at first, but returns and orders Kioyshi to show up. As Kiyoshi hadn't arrived, he didn't appear & Meiko becomes suspicious. When the Chairman ends his task, Kiyoshi runs back and reaches the hole just before Meiko arrives, but didn't manage to slip through the tight gap. When he becomes convinced that all is over, Gakuto triggers the collapse of the trash under Meiko which made her fall. A standing Kioyshi helps her up and she left after striking Gakuto, without realizing about the hole. An exasperated Gakuto says to him he uses the ploy he was saving for the real deal. As Kiyoshi comments on the escape hole's small size, an eavesdropping Shingo looks at them with suspicion.

Back at the mess hall of the Prison Block, Kiyoshi and Gakuto's conversation about the escape is interrupted by Shingo who thinks they are closer than before. Meiko arrives in the cells to take the purchase request forms she gave them, wearing her "night uniform" (her pyjamas), which excites Gakuto and lead to him being hit as a result. Gakuto asks Meiko for a pocket audio player and his request is accepted after he claims he need it for his English lessons. Meiko also posts the schedule for the next month, exciting the boys in the process, and their are informed that the Track Club's regional meet is being held the days of the prepared escape. She promptly assigns Gakuto, Kioyshi and Shingo to luggage duty and Jo and Andre to trivia tasks.

At the waste disposal area the next day, Gakuto and Kiyoshi discuss their plans to find a way to resolve the problem that Shingo's presence poses. A nearby Shingo wishes to himself to speak to Kiyoshi more, however their conversion is overheard by him. When he continues eavesdropping, he misinterprets their deliberations about him as homosexual. Afterwards at the changing room of the Prison Block's bathing area, Shingo thinks he has misheard and enters the shower room to find Gakuto kneeling with his head at a level above Kiyoshi's knees as he picks up a soap bar he dropped. Again misinterpreting the scene, Shingo hid himself behind the wall. Trying to convince himself that he probably hallucinated, he looks again and saw Kiyoshi holding a kneeling Gakuto at the hips, who had tumbled and is helped by him. As a result, Shingo entirely misinterprets the situation as the two engaging in homosexual acts. When he screams and is noticed by the two, the two threaten him to leave by leering at him thinking that he was eavesdropping on them and a terrified Shingo runs away.

The next day before the prison labour slot starts, Shingo asks the Vice-President to be in charge of other tasks and his request is granted. During the work, Gakuto heard the disembodied voice of Kiyoshi and finally found him inside a drainage channel that could help him travel from the luggage-duty post. As he returns to the restroom by using the drainage channel, he overheard Shingo talking to Andre and Joe about him and Gakuto's 'physical relationship' and his interpretation of the shower scene. They are interrupted by Meiko who chased them away and continues to do squats right above Kiyoshi. He is distracted by her movement for a long time before finally decide to leave. However, Meiko slips and the spear of her heel stabs Kiyoshi's butt just as he began inching his body away. At the end of the day, Meiko asks Kiyoshi if he was skipping his job as he was in the restroom a long time. Kiyoshi states that he has a delicate stomach but Shingo surprisingly interrupts to deny this. He claims Kioyshi has hemorrhoids as he reveals a large bloodstain on Kiyoshi's butt. In the Prison Block, Meiko delivered all the items the boys asked for and informs them that they would be in the computer lab with girls the next day as there are no computers in the Prison Block for the IT lessons.

The next day during the IT lesson, the boys's delight quickly fade as the girls in the room scorned them, with the exception of Andre. Gakuto tells Kioyshi that they will obtain a recording during this lesson in order to not arouse any suspicions during the breakout. Hovever he is unable to find any sounds on the Internet. To both of their shock, Gakuto realizes one of them must make his own recording and that only he can do it. Despite Kiyoshi's protests, Gakuto says that Chiyo is in the room and will probably cancel his date with Kiyoshi if the latter did it. After saying good luck to Kiyoshi and testing the microphone, Gakuto defecates in his pants to everyone's dismay. Later he is made to wear tracksuits and is humiliated by Meiko as the other boys couldn't stop laughing at him, thinking Gakuto's action is linked to his physical relationship with Kiyoshi. Meanwhile, the Chairman decides to rebury his photos by sealing them permanently with cement after he dug them out, and fills the hole with the rest of the cement from his wheelbarrow. Kioyshi decides to recheck the escape hole, but discovers that the hole had been blocked.

At night in the mess hall of Prison Block, Gakuto blames Kiyoshi for the hole being blocked and claiming that Kiyoshi didn't check the hole in time before finally losing his mind to anger. Gakuto begins haranguing him about the embarrassment of defecating on himself for nothing and the ruination of his high school years. The three others boys ask the two to stop their 'lover's spat' and Kiyoshi is unable to deny their supposition as it would reveal his escape plan. During the night, he heard Gakuto crying in his cell and begins to contemplate. At dinnertime next day in the school courtyard, he confronts a dejected Gakuto and tells him he will continue trying to escape by disguising himself as a girl in order to leave by the front door. The three other boys still misunderstood the statement as a role reversal in his physical relationship with Gakuto.

During the next day, Gakuto regularly makes brash mistakes, and pokes his own head in Meiko's shirt and her skirt when she disciplines him. After suffering a punishment, Gakuto tells Kiyoshi it not enough yet to make Kiyoshi's plan work. Seeing the USC President talking with Meiko, he runs to them while begging forgiveness and avoids Meiko's strike by making an acrobatic jump before finally sliding below Mari. As everyone look at the scene with absolute horror, he grabs Mari's skirt from below and it fall to the ground as he slid. 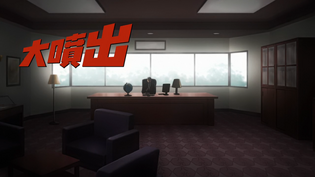 Differences between Manga and Anime Edit

Retrieved from "https://prison-school.fandom.com/wiki/Episode_3_(Season_1)?oldid=18269"
Community content is available under CC-BY-SA unless otherwise noted.