The Man Who Viewed Too Much

The Man Who Viewed Too Much

The Man Who Viewed Too Much (尻すぎていた男, Shiri Sugite Ita Otoko⃝ℹ) is the 2nd episode in the Prison School anime, which premiered on Tokyo MX on July 18th, 2015. It covers the last few pages of Chapter 6 through Chapter 12 of the manga in plot.

After seeing Kiyoshi falling just before her and he sees her crotch while she is urinating, Hana screams loudly. When Meiko arrives and questions Kiyoshi, a crying Hana tells him to not say anything about the incident. To his bewilderment, Kiyoshi receives congratulations from his fellow prisoners after Meiko ends the prisoners' work shift for the day. At his room, the Chairman tells Mari to allow the boys to have free time during the weekend despite Mari's views on the boys and their perverted behaviour. Though the Chairman agrees with Mari over their punishment, he intends to give them weekend leave and allow them to remain in the school despite her objection. It is revealed that the Chairman is the father of Mari.

In the courtyard of the Prison Block, Meiko orders the boys to reclaim some wasteland for a vegetable garden and she proceed to tells the boys that they would not have weekend leave. However, Mari arrives and tells them that they would have three hours of free time if they work hard and exhibit good behaviour, to the boys's joy. As the boys observe the USC's popularity amongst the school, Hana delivers the new edition of the USC's official guidebook. The boys are interrupted when Kiyoshi is shoved aside by Joe in order to save his ants, whom he is revealed to have a love of. When Mari comes to the empty Chairman's room to deliver the USC's official guidebook, she finds pornography on the computer desk and becomes edgy. She return to the boys' workplace where the male prisoners are having a break and declares that they are lazy at work. As a result, Mari announces they would to work during the weekend, to the boys' shock and Kiyoshi's horror. Kiyoshi is hit by the Vice President when he protests and he falls on the ground. Observing the ants, he decides he must escape in order to go to the Sumo Festival with Chiyo.

Three days later during his prison labour when he must extricate the garbage, it is revealed that Kiyoshi dug a hole in the waste disposal cabin's wall. Returning to his work, he saw Chiyo at a window and confirm to her by using gesture that he will come to the afternoon rendezvous in front of the sumo gym. He then saw Gakuto's being punished for having forgotten garbage, whereas it is Kiyoshi's fault. Later, at the dinner, Kiyoshi notes the strange attitude of Gakuto and the latter shows him a piece of paper at night used by Chiyo to communicate via the window, which makes Kiyoshi very nervous. In the shower as he is worrying about Gakuto informing the USC of his plan, Gakuto comes behind him and uses a sumo term while proposing to wash Kiyoshi's back. The next day, Gakuto imitates a sumo's gesture to Kiyoshi's shock. Covering the hole with a plank, Kiyoshi is interrupted by Hana who ask him if he talked about her peeing to the other boys. Despite his denial, she wanted him to pee in front of her as retribution, and threatened him to kill him if he refuses. As he is reluctantly about to do so, they are interrupted by Gakuto and Hana is force to leave.

To Kiyoshi's panic, Gakuto then approach the hidden hole and tells Kiyoshi he wants to help him to escape - not knowing he was about to get stabbed by a fork. Gakuto explains to him that his gestures were meant to inform him and that the day of Kiyoshi's rendezvous with Chiyo is also a special day for him. At the evening, in the USC's shower room, Meiko made the same references about sumo bathing to the Mari while proposing to wash her back. Mari misinterprets Meiko's references as a remark on her body size. Mari apologized for having Meiko guarding the boys, to which Meiko responds that it is nothing and ask if they can force them to work during the weekend. Mari says that only model prisoners should; the boys are not such according to her and as such should not have leave. She also confesses that she is unsettles by the fact that the male voyeurs will be released in two weeks. Back at his office, the Chairman realizes that Mari rescinded the prisoners's free time because she saw the pornography on his computer and decide to take "educational" file home.

At the mess hall of the Prison Block, Gakuto informs Kiyoshi that he wants to buy a limited-edition figure at a four-year convention. Noting that Kiyoshi couldn't be absent three hours without anyone noticing it, he offers his cooperation and strategic expertise in return for the figurine. When Kiyoshi came to think it impossible to escape, Gakuto then tells Kiyoshi he has a plan. The Chairman and Mari come across each other in a school corridor but he drops his file containing South American ass photos just after he begins to speak with Mari. After a brief moment of silence, Mari leaves while walking on the photo in the process, announcing her decision to be more ruthless with the boys to ensure they will not became matured perverts like the Chairman. After Kiyoshi had thrown out the garbage, he appears to have a fight with Gakuto about the forgotten garbage. Hana knocked down the cabin when she kicked Gakuto to stop the fight. The claim Hana makes to Meiko that the boys broke the cabin is accepted. In spite of the boys' protests, they get beaten by the latter with a horse whip under the dubious option of "Heads or Tails".

To their joy, Meiko then orders the boys to rebuild the cabin after administering their punishment - as they were only acting in order to obtain the tools and lack of oversight their escape. However, they are watched by Hana; Gakuto tries to distract her but is severely beaten. He decides to use Kiyoshi instead, and Hana accompanies Kiyoshi to the toilet after she forces him to drink tea. Kiyoshi try to distance Hana by running to the toilet and locking the door, but is immobilized by her inside it after she leaps over the cubicle wall. As they struggle, Hana falls at the same time as Kiyoshi loosing himself. Hearing Hana's screaming, Meiko rushes to the toilet to find Hana covered with urine whilst Kiyoshi fled in horror. Meiko informs the boys of Hana's absence, and beats Gakuto when she saw him smile. 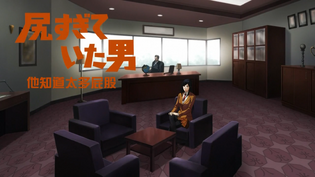 Differences between Manga and Anime Edit

Retrieved from "https://prison-school.fandom.com/wiki/Episode_2_(Season_1)?oldid=17071"
Community content is available under CC-BY-SA unless otherwise noted.