The Peep Job (ノゾキ大作戦, Nozoki Dai Sakusen⃝ℹ) is the 1st episode in the Prison School anime, which premiered on Tokyo MX on July 11th, 2015. It covers Chapter 1 through most of Chapter 6 of the manga in plot.

The private co-educational Hachimitsu Academy is a high school in Tokyo with academic excellence. This strict all-girls boarding school undergoes reform after the appointment of a new chairman in the school board. Though the reform introduces male students into the cohort, only five first-year boys are admitted with a ratio of 1 to 200 at the start of the school year. Their low number is a catalyst in their lack of confidence in approaching girls & their disfavour in the school. When Kiyoshi attempts to approach two girls in the school cafeteria to the opposition of the other boys, he failed to say a thing & lost his chance when another girl took them outside. The older schoolgirl reveals that all the schoolgirls are secretly forbidden to talk to the boys by order of the elusive Underground Student Council.

All the five first year boys are assigned to different classes & as a result, Kiyoshi found himself the sole boy in his class. When he drops his sumo wrestling rubber, Chiyo, the cutest girl in his class according to Kiyoshi, sees it to his mortification. After a timid contact, it turns out that she is a sumo fan & they have a conversation after school while the boys wait for Kiyoshi outside the school building. That evening in the boys' dorm room, Kiyoshi learns that the boys plan to peek on girls in the baths. In the hallways, he also learns that they are spying on his class and is disturbed by the fact that the boys may see Chiyo naked.

The boys decide to spy on the roof by using a iPhone attached to a rope lowered through the skylight, & Kiyoshi lost his doubts after seeing Chiyo outside of the bathroom. However, he drops the rope from shock when he is told that they use his iPhone. He is forced to retrieve it in the bathroom but is caught by Chiyo, who thinks he is her friend Mayumi as she didn't have her contact lenses & drags him to the bathroom, through he manages to hide his identity. In the meantime, the boys decide to join him but are suddenly attacked by a flock of crows & "arrested" by the Underground Student Council who announce their capture to the girls in the bathroom. Kiyoshi manage to hide just in time during the confusion, even when the real Mayumi joins them in the baths.

In the playground, the boys are "lynched" and asked about Kiyoshi's whereabouts. Observing the scene, Kiyoshi is surprised by a friendly girl with a USC guidebook who explains each of the USC members, & finally reveals herself as the President of the USC. Kiyoshi is dragged in front of the crowd & weeps after seeing Chiyo in the crowd. The next days, the boys are sentenced to one month in the school's Prison Block, and are convinced to accept their punishment as they don't want their parents to find out about their peeking. They are ordered to do manual labour & brutally beaten in the process of their hard work. Kiyoshi prevents the Vice-President of the USC from humiliating Andre & is shocked at first when he heard that the other boys are angry at him as they enjoy being beaten. In the aftermath, Kiyoshi changes his opinion too however.

At the USC office, the President sends Hana to assist the Vice-President after seeing the punishment backfire. After Meiko introduces her, Hana sends the boys to collect leaf clovers in the school grounds for charity. Though appearing to be a nice girl at first, Hana reveals herself to have a cruel personality and violently beats the boys - who found no joy at being punished by her & fail to convince her to stop the beating. Looking for other leaves & returning a baby crow to its nest, Kiyoshi climbs a tree to see Chiyo at the upper-storey window. He falsely tells her that he did not partake in the peeping incident & promises that he will accompany her at the sumo match. To his horror, Hana walks below the tree just as Chiyo leaves. Though he clings onto the tree branch & hid when he saw her below preparing to urinate, an adult crow bearing on him made him fall off the tree however. 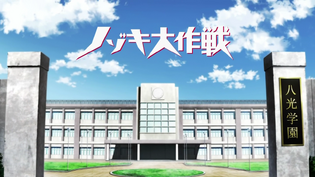 Retrieved from "https://prison-school.fandom.com/wiki/Episode_1_(Season_1)?oldid=18808"
Community content is available under CC-BY-SA unless otherwise noted.