USC President (At the final chapter of the manga)

Episode 1
Chiyo Kurihara (, Kurihara Chiyo⃝ℹ) is a supporting character of Prison School. She is a first-year student in attendance at Hachimitsu Academy, a member of the school's Go Club, the daughter of Mr. Kurihara, the younger sister of Mari Kurihara and the love interest of Kiyoshi Fujino. [1]

Although Chiyo was the key motivation for all of Kiyoshi's antics, she herself received little focus throughout the story, until the final arc where she played a major role in deciding whether to accept or reject Kiyoshi's love confession.

Chiyo is a pale-skinned teenage girl with shoulder-length brown hair that has square bangs hanging over her eyebrows, brown eyes, full pink lips and Kiyoshi Fujino describes her as the cutest girl in the class that her cute outward appearance belies her strength.

She is usually seen wearing the standard female school uniform. During her incarceration, she wears an oversize female prison uniform consisting of a striped short tank top and carpi pants, until Kiyoshi lends her his more form-fitting prison uniform.

On her first date with Kiyoshi, she wears a pink hooded sweater with a half-length dress (one of the few times she is seen not wearing the school uniform).

Chiyo is a kind & sweet girl who is notably one of the only female students that is not opposed to the admission of boys in Hachimitsu Academy.

She is a avid fan of sumo wrestling with the dedication to physically purchase tickets for a sumo student tournament. Her commitment to sumo wrestling is what inadvertently results in meeting Kiyoshi Fujino & befriending him. Chiyo's love of the sport is strong enough that that she believes her grandmother told her that any fan of sumo wrestling cannot be evil.

When she dates Kiyoshi at the sumo tournament, she begins to develop feelings for him and they become the first couple in the series. However, Kiyoshi has not kissed her once, making their relationship a pure one. Chiyo is in regular contact with her father (the school chairman), as shown when she texts him to thank him for apparently giving Kiyoshi permission to go to the sumo tournament. She has a strong sense of justice, defending Kiyoshi and the boys when he is blackmailed for expulsion by the USC. In particular, Chiyo is a protective and loyal companion to Mayumi Tanaka (Chiyo's best friend) and she is willing to put herself in harm's way for her. When girls try to bully her into getting blackmail photos on behalf of Kate Takenomiya, she shows the mental tenacity and physical strength to defend herself and protect Mayumi using sumo moves.

Chiyo can be quite naive at times, and this is shown in particular when she does not know of the USC's existence when her sister Mari is the president. Chiyo is apparently completely oblivious to the fact that Mayumi and Kiyoshi do not share her interest in sumo wrestling. Chiyo even manages to mistake Hana's sudden disappearance into the mountains as a personal training camp & Kiyoshi being missing as sheer coincidence.

Moreover, this also holds true when she mistakes all the actions for the USC's escape plan for a surprise birthday party. Such is Chiyo's consciousness and purity that she is incapable of thinking ill of another person, even after learning the true nature of the relationship between Hana and Kiyoshi.

However, at the end of the series, Chiyo completely loses her sanity and a complete change of personality can be seen, losing all that was left of her innocence to having a personality similar to that of her sister Mari Kurihara's misandrous personality.

Chiyo is the one-sided love interest of fellow Class 1A student Kiyoshi Fujino, who first meets him after class when they have a conversation about sumo wrestling. She soon built up a strong friendship with Kiyoshi and invited him over to watch sumo wrestling on the weekend. The next week, the boys with Kiyoshi infiltrate a female-only bathing area to tape the area using a video phone on a rope - which falls into the changing room. When Kiyoshi then enters the bath area wearing a towel as a disguise to retrieve the video phone, he sees a naked Chiyo without being discovered. In the bath, Chiyo mistakes Kiyoshi for Mayumi Tanaka and everyone except Kiyoshi leaves when the girls outside raise the alarm - before he is caught elsewhere by the President. The boys are then imprisoned in the school's Prison Block & the USC also stop giving weekend leave to the prisoners for their perverted behavior in prison, truly preventing their date. Chiyo becomes convinced in the Go Club that Kiyoshi did not peek by Takehito Morokuzu's (Gakuto) claim, though he did and failed to correct her.

In order to go to the date, Kiyoshi contrives with Gakuto to escape the prison by cross-dressing as a girl by stealing a girl's uniform. During the date, Chiyo took a photo of her with Kiyoshi and shared it with her father and sister, who turned to be the Chairman and Mari Kurihara respectively, hence leading to the USC's immediate discovery of the breakout. Chiyo also discovered a girl's uniform (which was her own) in Kiyoshi's bag, and left in disgust. However, she cheered up afterwards and reasoned that Kiyoshi had his own reasons for doing that. Kiyoshi's breakout attempt led to the boys having their prison stay extended, and the USC threatening to expel Kiyoshi. The USC failed to get Kiyoshi to sign the withdrawal form when Chiyo comforts him and threatens the USC with her own withdrawal from school. The USC began plotting to expel all the boys instead and Chiyo discovered their conspiracy. As part of the effort to save the boys from expulsion, she starts sending messages through the boys' meals and intercepting the messages tagged to the food bin bags in the disposal area. Using their food messaging system, Gakuto plans to have Chiyo rendezvous with the boys and perform a triple switch with Jouji Nezu, enabling Gakuto to gather evidence of their being framed in the USC's plots (via Operation Boys Expulsion). The plan is saved when Anzu acts as a decoy to occupy the USC Vice-President Meiko Shiraki when she is on guard. When the boys successfully prove that they were framed by the USC to breakout from the Prison Block multiple times to the Chairman, they are freed and their imminent expulsions are overturned.

When she enters the prison, Chiyo attempts to act differently by wearing heavy makeup and scant clothes out of jealousy and her inability to to personally ask Mari as whether they are true. The conversational vibe between Kiyoshi and Mari gives Chiyo feelings of misplaced inferiority and jealousy towards her sister. Kiyoshi helps Chiyo to clarify the rumors with Mari, whose response was that those rumors are false. However, Mari's intentional withholding of her 'breakout plan' from Chiyo eventually had Chiyo assuming that the strange activity from the boys (which was part of the 'breakout plan') is actually part of her birthday celebrations. Chiyo was soon released from prison without any knowledge of the plan, and true enough, was greatly offended when the ASC disposed of the PBR that the boys had constructed, which she perceived to be her birthday gift. She proceeds to attack Kate but the latter turned out to be trained in Aikido and stood her ground. Kate decided to let the matter drop as she was occupied in psychological warfare with Mari.

During the Sports Festival arc, it was hinted that Chiyo began to suspect there is something going on between Kiyoshi and Hana, although she has yet to confirm or voice out any of her suspicions yet. She also mistakenly believed that Kiyoshi's promise to her was that of celebrating her birthday after the Sports Festival, when Kiyoshi intended to confess his love for her. When the vast majority of the school takes the side of the ASC in the All-Student-Council Cavalry Battle, she chose to take her sister's side as part of the USC. She formed a team with Anzu Yokoyama, Mayumi Tanaka, and Satou, with Chiyo as cavalry jockey. During the long drawn-out match, when it was revealed to the entire school that Kiyoshi was wearing panties with his erect genitals exposed, Chiyo expressed her admiration for Kiyoshi's social sacrifice to help the USC, yet again mistakenly believing that Kiyoshi wearing panties was part of his plan in helping the USC. Subsequently, when Kate repeatedly harassed her team members Anzu, Mayumi, and Satou, Chiyo became outraged enough to attempt a suicidal strike to take down Kate Takenomiya's team but failed and they were eliminated from the game. ASC and USC teams were eventually forced to declare a tie by the end of the event.

After the event, Chiyo requested for Hana to pass to Kiyoshi a memo on her behalf. Hana grudgingly completed the delivery, but not before tearing up the memo and shoving the pieces into Kiyoshi's mouth. Chiyo had to come in to correct the message that Kiyoshi had gotten from the mistaken re-arrangement of the pieces. Chiyo expected Kiyoshi to celebrate her birthday, but Kiyoshi yet again misinterpreted the message to be doing a proper love confession during the BBQ party. Chiyo's obliviousness continued until the day of the BBQ itself.

During the BBQ event, Chiyo was the first to arrive at the venue and was surprised that there wasn't any surprise birthday party planned for her in the first place, with Kiyoshi struggling to get to the venue and the rest of the attendees elsewhere distracted with the PBR-ship. Chiyo wasn't even aware that her sister Mari had left school for an exchange program. Hana came to pass Chiyo her birthday gift but her ulterior motive was to dissuade Chiyo from accepting Kiyoshi's love confession by telling her about the perverted things she and Kiyoshi did together. Kiyoshi arrived and was shocked by Hana's betrayal, but Chiyo decided to let Kiyoshi give his side of the story. Kiyoshi chose to reveal (almost) every perverted thing he had done and subsequently made his love confession to Chiyo. It looks as though Chiyo was about to turn down Kiyoshi but in fact she was disagreeing with Hana - Chiyo's feelings for Kiyoshi was mutual and she is willing to accept Kiyoshi's faults. Kiyoshi and Chiyo's mutual joy were however short-lived; Hana forcibly pulled Kiyoshi's pants off to reveal Kiyoshi's final lie: He did not actually kept Hana's panties in the drawers as he claimed, but was actually wearing it while making his love confession to Chiyo. Kiyoshi could not hold back his bladder and urinated all over Hana and Chiyo.

In the final chapter of the series, it was strongly implied that the love confession was ultimately a failure and these twist of events had broken Chiyo, causing her to develop misandry (a hatred of men) and following her elder sister's footsteps by becoming the next President of the Underground Student Council. 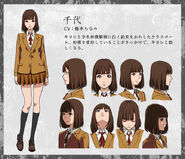 Chiyo in the anime opening

Chiyo in the anime ending

Chiyo in the manga

Chiyo (Left) & Mari Kurihara (Right) when they were young

Chiyo in the Manga Factfile 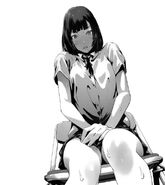 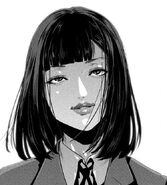 Chiyo becomes the next president of the USC (Ch. 277)

Chiyo on the Volume 05 Cover

Chiyo on the Volume 14 Cover

Chiyo on the Volume 28 Cover 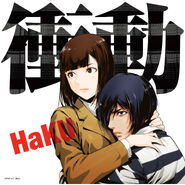 Chiyo on the HaKU "Shoudou" cover with Kiyoshi Fujino