This page is a list of all the named characters of the Prison School manga and its anime adaptation, created by Akira Hiramoto.The character's storylines and interactions are set in Hachimitsu Academy, the surrounding urban areas of Tokyo and the mountainous forestry surrounding the city within modern-day Japan. The storyline of the series revolves around the academic reform of the school, with the admission of the five boys and their subsequent struggles to enjoy social interaction with the academy's schoolgirls.

The main protagonists of the series are the five first-year boys, who struggle to become accepted within the school's all-female student body and achieve their adolescent dreams of a Wet T-Shirt Contest. The visual gag style of the manga artwork results in characters often being drawn using extreme visual angles and simplistic emotions for comedic effect. The series is influenced by Akira Hiramoto's high school experience and the American prison drama film Cool Hand Luke. 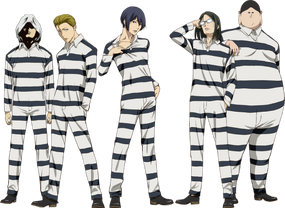 This section lists all individual character articles for the series by social affiliation. The individual character coverage on the wiki considers the physical and personal characteristics of the subject as well as a detailed plot summary of their storyline. The character descriptions can be found within the Manga§Characters article.

Retrieved from "https://prison-school.fandom.com/wiki/Characters?oldid=18623"
Community content is available under CC-BY-SA unless otherwise noted.