The Chairman (理事長, Rijichō⃝ℹ) is a supporting character of Prison School who works as the board chairman of Hachimitsu Academy. Notably, his first name is not known and his second name is not mentioned directly in the manga. He is the father of the female students Mari (a senior student and Underground Student Council President) and Chiyo (a first-year student).

The chairman is a tall and handsome middle aged man with grey hair and black eyes along with a thin and neat mustache. He typically wears a white vest underneath a dark blue suit with light blue tie.

During his stay in the hospital, he wears a typical male hospital uniform. After his escape from the hospital, he is seen only in an underwear. At one point, he wears Honey's torn thong. He eventually wears suit again after being reconciled with Mr. Important.

The Chairman is a grandiose and stern character who places emphasis on every ending word of his thoughts. He is a wealthy and influential man. He is a reasonable character who tries to judge the students fairly and unharshly, helping the boys; however, his sense of justice allows him to be manipulated by others. He is a compassionate person, as shown by his closeness to his daughter Mari in her childhood, his intervention on behalf of the boys and by filling a hole in the school wall with cement.

In keeping with his authority and powerful aura in the school, his name has not actually been stated in the manga as his second name is implied from his daughters.

The Chairman is introduced the newly-appointed chairman at Hachimitsu Academy when the 5 boys are enrolled at the all-girls school, which he instigated to reform the traditional school by allowing male enrolment. However, many of the faculty, student body & alumni were opposed to this decision yet were promptly overruled when the reforms began. A wealthy but busy man, he makes his cameo as the perverted father of Mari Kurihara, who continually views pornography in his school office. However, it is shown that his lecherous habits drove a wedge between him and a younger Mari, who disapproves of his tastes and punishes the boys for her frustration. When he drops his private photo collection file of South American women in front of Mari, he buries it in the school grounds near the disposal area and mistakenly fills in the large escape hole dug by Kiyoshi and Gakuto with cement.

The Chairman is later revealed to be the loving father of Chiyo as well as Mari, both of whom he is protective of. When Kiyoshi Fujino's breaking out to date Chiyo was discovered by him and Mari, he sanctions an extension to their prison stay. Kiyoshi avoids expulsion when Chiyo threatens to admit her own expulsion form. When the boys are framed to breakout three times by the USC (so that they could be expelled), they hide a petition within the expulsion forms to the Chairman. The Chairman gives the boys a one-day extension to prove they were framed by the USC, after Kiyoshi correctly answers his "Tits VS. Asses" riddle by favouring asses & quoting Darwinian evolution, allowing the boys the chance to cover for Gakuto and produce the data on Operation Boys Expulsion.

In the aftermath of the conspiracy, the Chairman approves of Student Council President Kate Takenomiya to incarcerate the Underground Student Council in the school's Prison Block for violating the school code and physically abusing the boys, when she argues that they should not be exempt from the rules. Later in the manga, Kate manipulates the Chairman into permitting the imprisonment of his other daughter Chiyo when she beats up a group of girls sent by Kate harassing her directly below the Chairman's office window.

The Chairman is seen outside of school driving a sportscar and picks up a endowed hitch-hiker who he soon drops off. When he continues driving the sportscar through a forest road, he crashes the car and smashes his phone in the crash. Stuck in the middle of nowhere, he carves a path through the summer forest until he sees a boy crying for his drowning dog. The Chairman proceeds to dive into the river and save the dog, but is forced to toss the dog to safety when it bites his arm in panic. The Chairman is driven across by the river's current over a waterfall and emerges on the bank with no pulse. When a passerby discovers him, he is saved by a passerby with a defibrillator and hospitalised.

When he regains consciousness in the hospital, he remembers nothing except his ass-fetish and his incomplete journey. After escaping the hospital and having an on-foot police chase, he dives under the city bridge and starts swimming in the Sumida river driven by his memory of his incomplete journey. Having returned to the summer forest without memory of the location, he becomes lost again after following the path he had made before and is on the brink of losing consciousness when he notices the same endowed hitch-hiker, whose name was revealed to be Honey. When he awakens inside Honey's camper van, she deceives him into thinking he is her fiancé to her contentment. After concluding the goal of his journey was supposedly to be with her, he quickly assembles a hammock and begins constructing a cabin for Honey.

The Chairman went up a helicopter and intended to parachute his way into school as part of his grand entrance, but a series of mishaps occurred with Mitsuko's clumsiness (As Kate's last resort in preventing a loss on ASC's side of the Cavalry match), which knocked out the pilot and puts the helicopter on a collision course with the school. The students' lives are saved by a combination of actions by Anzu, Gakuto, and the Chairman himself, and the helicopter ended up crashing into and destroying the prison. Mari was initially distraught as she thought that her father was killed in the crash, but it was quickly shown that both the pilot and the Chairman dropped to safety via a parachute. From his inner monologue, it was revealed that the Chairman himself was the first prisoner of the Prison School.

The Chairman was last seen in a real prison for endangering the school with the disastrous helicopter crash, thinking about taking a vacation as well as his daughters' well-being. His private thoughts revealed that he deemed Chiyo as the stronger of the two sisters, and worried more about Mari who he deemed to be more emotionally vulnerable.

His eldest daughter. The two have a strained relationship since Mari dislikes her father’s obsession with female posteriors and would often catch him doing something perverted while at school. Nonetheless, the Chairman cares deeply for his daughter and was willing to bury his stash of ass pictures in order to become a better father figure. As a child, Mari was quite close with her father and would often hang out with him. Mari had even shared her father’s adoration for tight buttocks although innocently so since she was at the age in which she believed everything her father said. It is implied that her misandric views arose because of her father. Despite becoming distant with her father, Mari still cares for him such as when she bursted into tears when she thought her father had died in the helicopter crash during the cavalry arc. She was relieved after learning that he parachuted out safely, but immediately grew disgusted after witnessing him, clothes in tatters, wearing a woman’s thong.

His youngest daughter. Although they rarely interact during the story, it is implied that he is on better terms with her than he is with Mari.

The Chairman was impressed by Kiyoshi’s answer to the ass vs tits question and recognizes him as a true assman. Otherwise, they have very few interactions during the story. It is unknown to what extent is he aware of Kiyoshi’s affections for his daughter, Chiyo.

Brief lover (she affectionately calls him “Darling”). They first met when she hitchhiked a ride in his car after witnessing her ass. During their first exchange of dialogue, she was able to quickly adapt to his delayed speaking pattern. When they meet again after he had lost his memories, she lies to him by saying that he is her fiancé when in fact she was engaged to Mr. Important. While fleeing from Mr. Important’s henchmen, they also engage in intercourse on a few occasions. Their brief fling supposedly ended after Honey reconciled with Mr. Important.

They initially disliked each other due to their affections for Honey and various misunderstandings involving a bear hunt. After cooperating together to fend off the bear, the two become quick friends such that Mr. Important had the Chairman's Lamborghini salvaged and called in a helicopter to transport him to the academy. Both have made plans to travel to Copacabana. 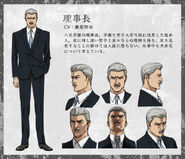 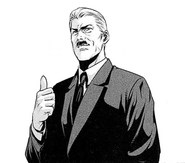 Chairman in the manga