Bitch (ビッチ, Bitchi⃝ℹ) is a supporting character of Prison School and a third-year student in attendance at Hachimitsu Academy.[1] She is the cavalry mount of the Aboveground Student Council's gyaru cavalry team within the Cavalry Battle.

Bitch is a tall, voluptuous young woman. She has long brown hair in a pouffe with sideswept bangs and brown eyes. She usually wears the female school uniform with the collar open. In the Sports Festival, she wears a white tank top and dark shorts.

Bitch appears to have a lack of mental inhibition, making her immune to the sight of Kiyoshi Fujino's nudity and capable of showering him with lewd insults with the other gyaru schoolgirls. She behaves in a very degenerate manner, offering to show Kiyoshi her chest to achieve her goal of eliminating Kiyoshi and the USC cavalry team. This behavior results in her extending the same offer to Anzu Yokoyama, suggesting that she derives enjoyment from her immodesty. However, her emotional outbreak at seeing Kiyoshi wearing striped panties demonstrates some limit to her indecency.

In the Cavalry Battle during the Sports Festival, the Underground Student Council's cavalry team faces large crowds of schoolgirl cavalry teams on the Aboveground Student Council's side.The USC employ the crude tactic of using Kiyoshi Fujino's erection to even the odds, only to be countered by Kate's deployment of the gyaru-cavalry team led by Bitch. The gyaru schoolgirls unnerve Mari with their invulnerability to Kiyoshi's erection. When she insults Kiyoshi to reduce his physical excitement, Mari refuses his request to touch her chest or provide any physical stimulus. However, Bitch's offer to touch her chest almost separates him from the cavalry formation - until Meiko Shiraki's accidental grip provides him the stimulus he needs. As a last resort, Hana Midorikawa pulled down Kiyoshi's shorts to reveal his striped panties and partially exposed genitals. The shocked crowd begins stampeding away from the scene, with a horrified Bitch frozen in place. Bitch was defeated when Kiyoshi touched her chest, causing her to fall from her mount.

Although Bitch was eliminated from the game, she came back a while later to assist Kate in harassing Anzu who was on the USC's side. Kate reveals that Anzu wears an oversize bra, and Bitch is requested to inspect her chest and determine her bra size by comparison. This provides Kate with the opening to insult Anzu.

After the Sports Festival event, Bitch happened to see Kiyoshi and Takehito Morokuzu (Gakuto) route to meet Mitsuko Yokoyama. While repulsed by Kiyoshi, Bitch was happy to see Gakuto (He became a hero overnight during the cavalry match). She paid Kiyoshi money in exchange for time to cavort with Gakuto, leading to Mitsuko's discovery of the cavorting and subsequent disappointment. Bitch was later seen outside of school, researching on materials of Three Kingdoms at a bookstore.

Bitch became knowledgeable enough to remind Gakuto that Mitsuko was playing a forgiveness ritual that references a scene in the 3 Kingdoms. Bitch also proposed a competition with Mitsuko where the winner becomes Gakuto's girlfriend. In the final test, Bitch unknowingly fulfilled the secret requirement for winning, but Mitsuko pointed that out. Both Mitsuko and Bitch decided to let Gakuto make the final decision on who is to be his girlfriend, but Gakuto's indecisiveness frustrated both girls, and they left him alone. Bitch was last seen walking off with Mitsuko, the latter offering to teach her more about the 3 Kingdoms.

After Gakuto was heralded as the hero that saved the school during the cavalry battle, Bitch became one of his many idolizers. Later, she pays Kiyoshi money so that she could spend time alone with Gakuto in a box (which hid Gakuto from his adoring fans while allowing Kiyoshi to freely transport him to Mitsuko). In their little arrangement, she would show interest in the Romance of the Three Kingdoms and take advantage of his nice nature by making sexual advances on him. Eventually they would be found out by Mitsuko, ending their brief arrangement. Later, she is seen in a bookstore reading a Three Kingdoms book. 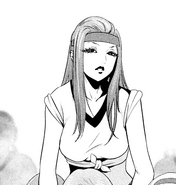 Bitch in the Cavalry Battle

Bitch on the Volume 21 cover