Anzu Yokoyama (, Yokoyama Anzu⃝ℹ) is a supporting character of Prison School and a second-year student in attendance at Hachimitsu Academy.[1]

She is the love interest of Shingo Wakamoto. Anzu was a member of the Underground Student Council who worked as Captain of the Guards under its president.

She is also the cousin of Mitsuko Yokoyama, the secretary of the official Aboveground Student Council.

Anzu's a lithe and athletic young woman of average height, with both brown medium-length hair and pale skin due to her Japanese heritage. She is described as thuggish looking.

She is commonly seen wearing the standard school uniform without a tie, with an open collar and no undershirt.

The early story line of the series proves Anzu's easy to manipulate. When she is promised a promotion by the Underground Student Council President Mari Kurihara, she easily dedicates herself towards deceiving a person she doesn't personally know. When Shingo Wakamoto confesses to her as to how he was able to leave the prison, she confesses to misleading him because she developed a crush on him. After she leaves the USC, she becomes more courageous and is active in helping the boys later in the manga, becoming a decoy so that Chiyo Kurihara could rendezvous with Kiyoshi Fujino.

Anzu is a cheerful and confident person, who regularly speaks to the boys comfortably when many other girls shy away. Despite her somewhat rough attitude, she's genuinely kind and friendly. She is also slightly immodest, showing her cleavage to the boys while sitting with Shingo in the canteen a few times. In the Sports Festival, she reveals her extensive knowledge on the USC. She is shown to be a highly competitive person with high-caliber gaming skill and athleticism, competing for USC jockey for the All-Student-Council Cavalry Battle.

When Shingo Wakamoto gains daily leave from prison, he meets Anzu in a games arcade and pretends to be on exemplary leave. She soon enters an on-off relationship with him and they go on a cinema date. When Shingo confesses to being a spy for the Underground Student Council who earned prison leave by betraying his friends to the USC, Anzu confesses to spying on him for the USC and sabotaging his watch to make him arrive after curfew, after gaining his confidence by the USC's command. She did this in the hope of a promotion in the USC, of which she was a junior member. Thus, the USC planned to claim he broke curfew making it the third breakout and then expel the 5 boys permanently. She then helps Shingo and promptly leaves the USC. Later on, Anzu helps the boys in a later breakout by acting as a decoy so that Kiyoshi Fujino could rendezvous with Chiyo Kurihara for a triple-switch during the boys' evidence-gathering efforts.

When the boys successfully prove that they were framed by the USC to breakout from the Prison Block multiple times to the Chairman, they are freed and their imminent expulsions are overturned. When the boys are freed, she continues to develop her relationship with Shingo to the chagrin of the other boys. When the boys tell Anzu that Mitsuko's dating Takehito Morokuzu (Gakuto), she tells them that Mitsuko's her cousin and a member of the official Aboveground Student Council. Her relationship with Shingo hits a rock when he copies Kiyoshi in a date by removing his clothing and concealing his nudity with a water bottle (which actually made Hana kiss Kiyoshi in revenge). Though she stops speaking to him for awhile, she reconciles with him soon after he sincerely apologizes. Anzu is then convinced by Shingo after his apology to compete for the USC in the All-Student-Council Cavalry Battle.

When both Hana and Kiyoshi disappear during the Sports Festival, an annoyed Anzu is coerced into competing against the PBR fragment and Satou for the position of USC main jockey. Even though Satou eclipses her by being more comfortable with the physical harassment of Shingo, both Joe and Shingo support Gakuto's nomination of the PBR to protect their nominated girl from the other and she storms off in anger. The Cavalry Battle results in Anzu assuming a forefront mount position with Chiyo's cavalry team on the Underground Student Council. Anzu had promised to Shingo that he can cope a feel from her breasts if the USC wins the cavalry match.

During the long drawn-out match, Kate repeatedly harassed Chiyo's team, where Anzu was one of the recipients of her harassment. Kate sent Bitch to taunt Anzu's breast size and of the use of the wrong bra size, upon which Shingo tried to intervene. In response to all the harassment, Chiyo led her cavalry team to attempt a suicidal strike to take down Kate's team but failed and were taken out of the game. Anzu was later seen trying to fix up her cousin Mitsuko's hair to stop her Rube Goldberg antics in the climax of the Sports Festival.

On the day of the BBQ event, Gakuto, Joe, Shingo, Mayumi, Satou, and Anzu traveled to the venue only to get sidetracked into riding the boys' PBR-ship along the river. Anzu's constant nip slips was unknowingly broadcast to Mayumi's video streaming for her fans, which eventually caused Mayumi's account to get banned. The boys and girls ended up playing in the water. The group was last seen riding on the PBR-ship to the sea, apparently having forgotten about the BBQ event altogether.

She is his cousin and he esteems him very much, he constantly protects her.

He's the guy she communicates with the most, and she has feelings for him. 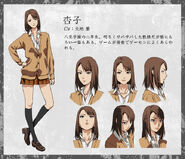 Anzu in the anime ending 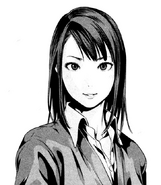 Anzu in the manga

Anzu on the Volume 06 Cover