Akira Hiramoto ( アキラ, Hiramoto Akira⃝ℹ) is a Japanese professional mangaka serialised in seinen publication Weekly Young Magazine, owned by Kodansha.[3] He was born in Okinawa in Japan in 1976, and is currently aged around 40.[4] The mangaka currently resides in the downtown area of Nerima, Tokyo.[5] Akira Hiramoto has produced multiple works while signed to Kodansha, of which the magnum opus was the long-running gag manga "Agonashi Gen to Ore Monogatari". The mangaka is currently working on two manga series as the author & artist of Me and the Devil Blues and Prison School,[6][7] the latter winning the General Manga Category award at the 37th Kodansha Awards Ceremony in 2013.[2]

In 1976, Akira Hiramoto was born in Okinawa prefecture of Japan.[4] In Hiramoto's junior high school years, the prospect of graduation into high school and part-time employment was only bearable when he drew manga as a hobby at manga cafes.[4] The high school experience of the male-female division proved to become an inspiration for his future manga series.[4] In 1995, Akira Hiramoto was signed to Kodansha as a manga artist when he made his debut with the one-shot "Sono Tomodachi no Gimon Ari" in Weekly Young Magazine.[3] The freedom of his high school graduation allowed Hiramoto to forgo higher education in the pursuit of a manga career, after winning a manga contest prize for his one-shot despite a lack of confidence in his artistic skill.[4]

In 1998, Akira Hiramoto's first gag comedy manga and series "Agonashi Gen to Ore Monogatari" began serialisation in Weekly Young Magazine[3]. It was published in the magazine for eleven years as his most famous and long-running work. In 2003, Hiramoto's second series, "Me and The Devil Blues," was serialised in Issue No. 11 of Monthly Afternoon Magazine during the original chapter run of Agonashi Gen - until the latter's completion in 2009 and its hiatus in 2008. During 2007, Hiramoto had a one-shot "Yarisugi Companion to Atashi Monogatari" serialised in Weekly Young Magazine which became a short series running for ten issues of Weekly Young Magazine'.' With the two other series in continuation and published in one volume by Kodansha.[3] The completion of this series preceded a three-year hiatus in which Hiramoto's manga received no serialisation.

In 2011 following a three-year hiatus, Akira Hiramoto's fourth series "Prison School" was published in Issue No. 10 of Weekly Young Magazine as his then-singular manga series. The comedy manga won a Kodansha publisher award in their "General" category in 2013.[3] In an interview with journalist Okita Akira, Akira Hiramoto identified American crime thriller Cool Hand Luke as an inspiration for Prison School and the use of American filmography as reference work.[4] In the interview, he cited depicting humanity, violence, desire and a woman of strength as his primary motivation to draw manga.[4] In 2015, Akira Hiramoto's manga Prison School received a television anime adaptation which he provided creative input for to its production committee alongside his magazine editor Toshihiro Miura and promoted.[8] In 2014, "Me and the Devil Blues" resumed serialisation from a six-year hiatus in Young Magazine the 3rd. In December 2015, the Oricon Manga Chart designated Prison School as the 9th-top bestselling manga by volume count in Japan and the 2nd-top Kodansha bestseller.[9] 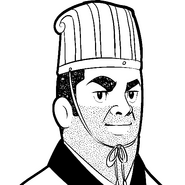 Retrieved from "https://prison-school.fandom.com/wiki/Akira_Hiramoto?oldid=19063"
Community content is available under CC-BY-SA unless otherwise noted.